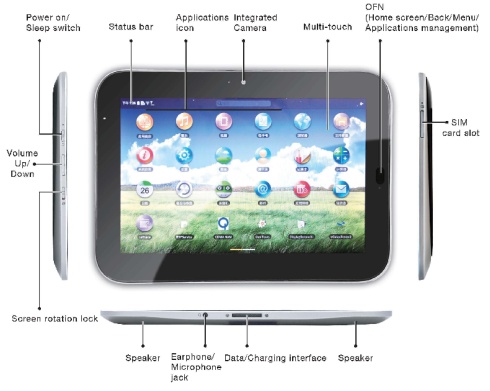 So you know that 10 inch Android tablet that Lenovo is selling in China under the “LePad” name? It looks like it will be called the Lenovo Skylight slate when it goes on sale in the US. That’s probably a good thing because while LePad might make sense in Chinese, in English it just seems like an odd name for a tablet.

Engadget spotted an FCC listing for the Skylight slate today, complete with photo, test reports, and a user manual. They all confirm that the tablet will have a 10.1 inch, 1280 x 800 pixel HD display, a 1.3 GHz Qualcomm Snapdragon 8650A chip, a 2MP camera, and Android 2.2 with custom Lenovo software running on top.

The tablet will have WiFi and Bluetooth capabilities and a multitouch display. It has stereo speakers, a built-in mic, and a 3-axis gravity sensor with compass support. The tablet has 1GB of RAM and a  27Whr lithium polymer battery.

The Skylight slate looks pretty much identical to the version the company was showing off at CES in January. The last I’d heard, it was set to launch outside of China in May, but there’s no word on the official pricing yet.

You can find more photos — including some pictures of the tablet with the rear panel removed after the break. Like other thin and light tablets we’ve seen recently, it looks like the largest piece of hardware is the battery.