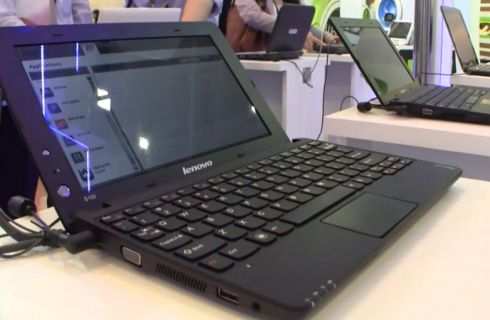 Intel hasn’t made any formal announcements about a 1.33 GHz Atom N435 processor, but it seems to be the chip of choice for netbook makers showcasing MeeGo Linux. The Asus Eee PC X101 netbook which was unveiled yesterday packs an N435 chip. And now the folks at Netbook NEws spotted a new version of Lenovo’s IdePad S100 10 inch netbok running MeeGo… and it also has an Atom N435 processor.

The rest of the specs remain unchanged from the S100 which launched earlier this year. The netbook has a 10.1 inch, 1024 x 600 pixel display and supports up to 2GB of RAM. The netbook also has a ridiculously tiny touchpad.

If I had to guess, I’d say that based on the model number the N435 is likely a slower, cheaper, more energy efficient version of the Atom N455 Pine Trail chip which has been around since last year. MeeGo is optimized for speedy performance even on low power systems, so budget netbooks with a slower chip might seem to be almost as fast as Windows netbooks with Atom N455 processors. Or maybe not. We’ll know more if and when Intel adds official specs for the Atom N435 chip to its web site.