The first smartphones with foldable displays are coming this year, allowing you to fold a device in half for use as a phone, or unfold it for use as a tablet. But why stop there?

Lenovo is showing off a preview of the first laptop with a foldable display. The company says it’ll be part of the Lenovo ThinkPad X1 line of premium devices when it ships sometime in 2020. 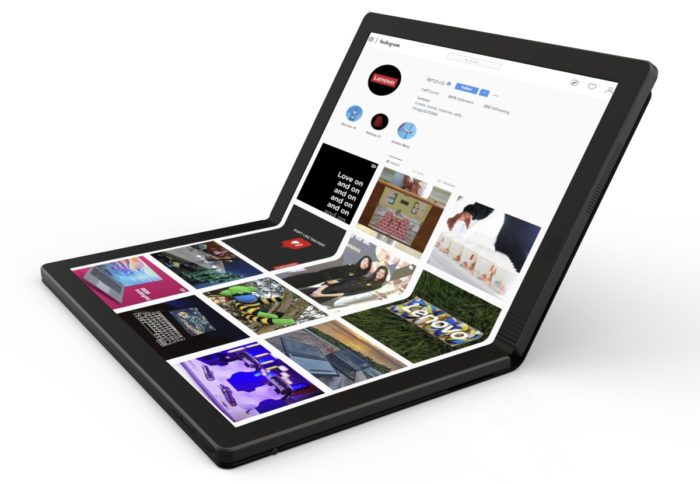 The notebook features a 13.3 inch, 1920 x 1440 pixel flexible OLED display from LG. Fold the screen at the middle and you can use the Thinkpad X1 like a laptop, with one part of the screen function as a display and the other as a keyboard. Unfold it and you have a large tablet.

This wouldn’t be Lenovo’s first foray into the laptop-with-a-virtual-keyboard space. The Lenovo Yoga Book line of devices feature dual screens, allowing you to draw, use handwriting, or type on one screen while viewing content on the other. What’s new is that the ThinkPad X1 foldable prototype doesn’t have two screens separated by a hinge. It has a single screen that folds at the middle.

In addition to functioning in laptop or tablet modes, Lenovo suggests you could use the device like a book, with “pages” of content on each side. You could prop it up using a kickstand for viewing media, use a pen for taking handwritten notes, or connect it to a docking station or keyboard if you need to do more typing. 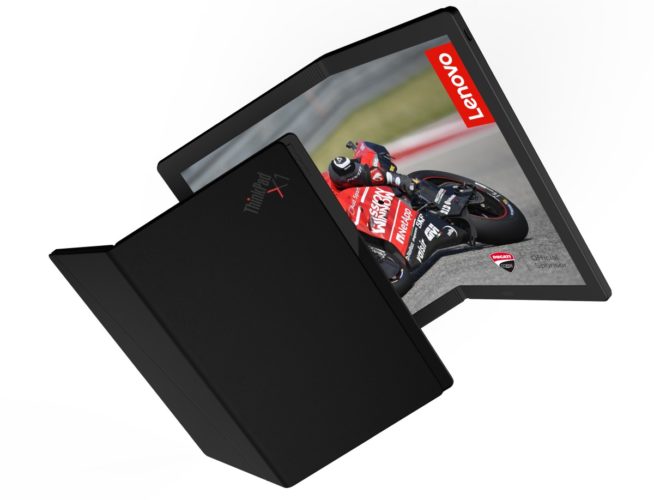 Lenovo hasn’t announced detailed specs yet, and we don’t know how much the ThinkPad X1 foldable will cost. But if device makers expect people to spend as much as $2600 on smartphones with foldable displays, I certainly don’t expect laptops with even bigger foldable displays to be cheap anytime  in the near future.

According to Tom’s Hardware, which got a chance to check out the prototype in person, the prototype has an unspecified Intel processor, a display with a 4:3 aspect ratio, two USB Type-C ports, a Windows Hello-compatible IR camera, and stereo speakers.

The Verge reports that the device weighs less than two pounds. And Gizmodo explains that when you’re using the ThinkPad X1 foldable in laptop mode, you get a “9.6 inch ‘half screen.'”

You can click on the links to any of those sites for some hands-on photos, videos, and first impressions of the prototype. Engadget, Ars Technica and Laptop Magazine also have some more photos and details.