Lenovo is introducing the first commercial smartphone that uses Google’s Tango depth-sensing technology. The Lenovo Phab 2 Pro is coming in September for $499 and it will be available worldwide (including at Best Buy, and Lowe’s stores in the US).

The Phab 2 Pro is a smartphone with a big screen and a 3D camera that enables a set of virtual reality and augmented reality experiences by allowing you to scan your environment and mix digital items with your real-world environment, using Googles Tango technology (the company is dropping “project” from the name now that it’s ready for commercial applications).

For example, you can use it to play games where aliens invade your house, or to virtually redecorate your home by scanning and measuring the room so you can see what it would look like if you painted the walls a different color or with new furniture.

The phone also has some pretty powerful hardware. 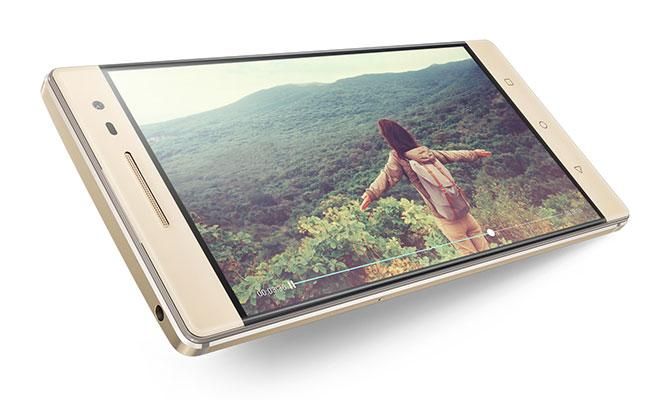 The Lenovo Phab 2 Pro features a 6.4 inch, 2560 x 1440 pixel IPS display, a metal unibody case that comes in gold or grey color options, and a huge 4,050 mAh battery with support for fast charging.

It has a Qualcomm Snapdragon 652 processor and 4GB of RAM.

What really makes the phone special though, is the camera technology. While most smartphones have front and rear cameras, the Phab 2 Pro has four cameras:

Those cameras are what allow the phone to scan the environment in real-time, create 3D models, and share those models with apps and games.

Among other things, this lets you use your phone to use your phone as a virtual measuring tape using nothing but the phone’s camera apps, even measuring in 3 dimensions if you want to see if there’s room for a table or bookcase, for example. Once you’ve made a measurement, you can generate a blueprint which is saved to your phone’s image gallery.

Or you can use augmented reality apps, fro instance, to view virtual dinosaurs roaming through your environment using an app from the Smithsonian Natural History Museum. There’s also a virtual dominoes game that allows you to set them up and knock them down as if there were really on your furniture.

Other features include a fingerprint scanner, a 1-hand operation mode (since it can be kind of tough to use a 6.4 inch phone with a single hand if you don’t have enormous hands), and Dolby Atmos sound output as well as Dolby 5.1 channel audio capture, which makes the Phab 2 Pro the first phone with that feature.

The Phab 2 Pro , but the way, is part of a whole line of Phab 2 smartphones. Other modles include the Phab 2 and Phab 2 Plus, both of which also have 6.4 inch screens, but which lack the Tango camera setup, have lower-resolution displays, and feature MediaTek processors rather than Qualcomm chips.