The Lenovo Phab 2 Pro is a smartphone with a big screen, a big battery, plenty of memory and storage, and one feature that makes it unlike anything else on the market: support for Google’s Tango platform which lets you use a mobile device to create and interact with 3D maps made from real-world environments.

First unveiled in June, the Phab 2 Pro is now available for purchase from Lenovo for $500 (although orders won’t ship for about a month). 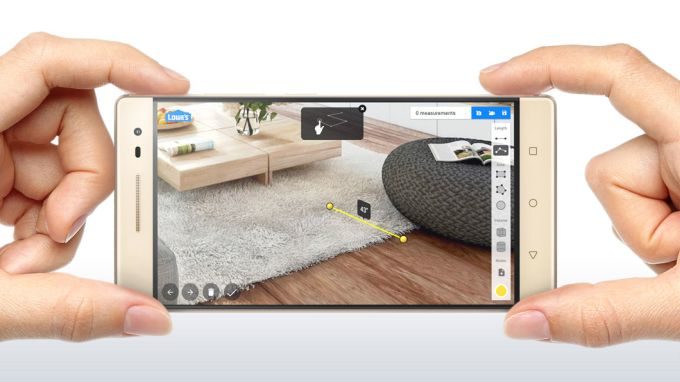 The Lenovo Phab 2 Pro is also one of the first smartphones to be sold online and in stores by the home improvement store chain Lowe’s. At first glance, that might seem like an odd partnership, but it makes sense when you consider that you can use the Phab 2 Pro to do things like create a virtual representation of a room and then see what it would look like if you changed paint colors, rearranged the furniture, or made other changes.

But what makes it unusual are the Tango features, including a rear camera system that includes a 16MP RGB camera, a depth camera, and a fisheye camera for wide-angle capture. Those cameras work together with the phone’s processor and software to let you pan the phone across a room to record the imagery as an environment that you can then interact with using augmented reality.

For example, Lenovo says you could play games that bring aliens into your home turf (kind of literally), raise a virtual pet in your bedroom, or try interactive games like Crayola Color Blaster for Tango:

You can also use the Lowe’s app to see what a new refrigerator would look like in your kitchen.

All told, Google says there are more than 35 Tango-ready apps available at launch.

There’s also an 8MP camera on the front of the phone, a fingerprint sensor on the back, and a microSD card slot for up to 128GB of removable storage.

The Phab 2 Pro is available in grey initially, but a gold model is on the way. The phone ships with Android 6.0.