The first standalone virtual reality headset compatible with Google’s Daydream platform is here. After unveiling the Lenovo Mirage Solo in January, Google and Lenovo have announced that it’s now available for purchase for $400.

That would probably be a lot more exciting if Facebook’s Oculus Go standalone VR headset hadn’t hit the streets this week for half the price (or less).

Lenovo’s headset does have some features the Oculus Go lacks though, including inside-out position tracking. 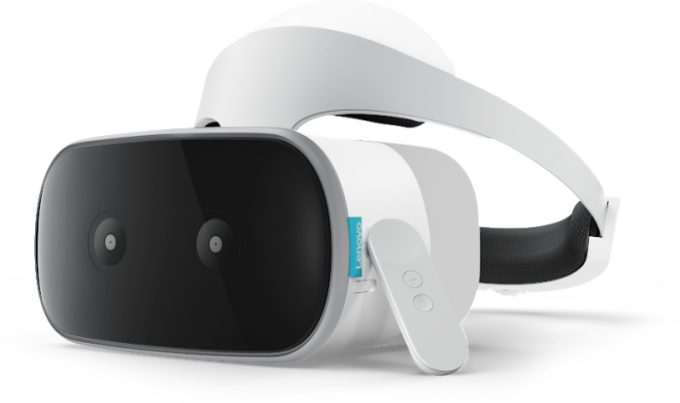 Basically, the Lenovo Mirage Solo has the guts of a pretty decent smartphone, including a Qualcomm Snapdragon 835 processor, 4GB of storage, and a 5.5 inch, 2560 x 1440 pixel LCD display with a 75 Hz refresh rate and a 110 degree field of view. It also has a 4,000 mAh battery.

In other words, it’s sort of like what you’d get if you tucked a high-end 2017 smartphone into a Google Daydream View headset… but without going through the hassle of inserting a phone, making sure it’s positioned correctly, and having to take it out when you’re done using it.

The Mirage Solo also also supports WorldSense position tracking, allowing the headset not only to know where you’re looking, but to also let you step forward or to the side, duck, or lean while playing a game or interacting with other virtual reality experiences.

The device also comes with a wireless motion controller that lets you point, grasp objects, and perform other actions.

Google says there are more than 350 Daydream-compatible apps and experiences in the Google Play Store, about 70 of which make use of WorldSense so far.

At this point the Mirage Solo certainly isn’t the cheapest way to get into virtual reality. You could pick up a phone-based headset for a few bucks and use your existing smartphone. Or you could buy an Oculus Go if you want a cheaper all-in-one experience. There are already over 1,000 apps and games for the Oculus Go/Samsung Gear VR platform… but they don’t yet support position tracking.

Meanwhile, the Lenovo Mirage Solo isn’t as powerful as an Oculus Rift, HTC Vive, or Windows Mixed Reality headset since it’s powered by smartphone-class hardware rather than gaming PC gear. But for about the same price as one of those headsets, the Mirage Solo does offer a fully untethered experience – no phone or PC required.