Lenovo’s Miix 10 tablet is a Windows 8 tablet with a 10 inch, 1366 x 768 pixel display, an Intel Atom Z2760 Clover Trail processor, and up to 10 hours of battery life. It’s one of the thinner, lighter 10 inch Windows tablets I’ve seen, and it’s also one of the more responsive.

You wouldn’t think there’d be  huge difference in performance between various tablets with the same basic specs including processor, memory, and storage, but some Windows 8 tablets with Clover Trail chips feel downright sluggish. The Miix doesn’t.

But you’ll still have to decide if that makes it worth $500. That’s how much it’s expected to cost when the tablet launches in the US this summer. 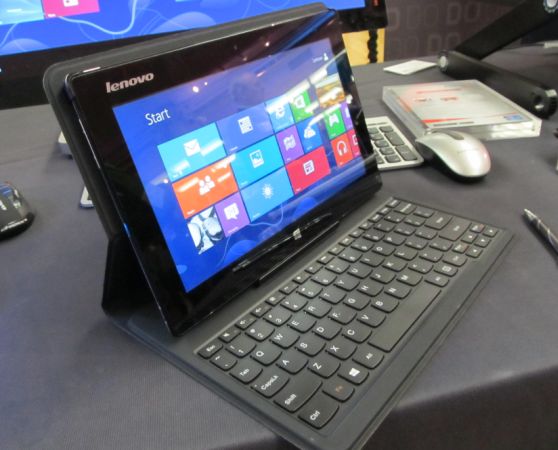 The good news is is that for $549 you can pick up the tablet plus a keyboard folio case, which makes the optional keyboard accessory one of the cheapest around.

And it’s a good case too. The bottom is flat and solid, and the back locks into place with a strong magnetic connection. I could definitely see setting the keyboard case on my lap to get some work done.

The case also attaches to the tablet via a docking port instead of a Bluetooth connection. While wireless keyboards may seem like a good idea, it’s annoying to have to pair the keyboard every time you want to use it. With this case as soon as you touch the connection points, you can start typing.

Lenovo doesn’t include any batteries in the keyboard. Instead, it’s powered by the tablet itself. But since the tablet alone gets up to 10 hours of battery life, you shouldn’t have to sacrifice too much run time to use the tablet with the keyboard.

The tablet measures 0.4 inches thick and weighs about 1.28 pounds.