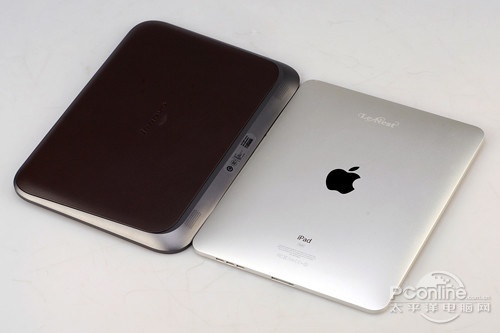 Lenovo’s first Android tablet has started shipping in China, where the folks at PC Online picked up a Lenovo LePad and plunked it down next to a first generation Apple iPad to see how the two tablet compare.

Spec-wise, the LePad has a 1.3 GHz Qualcomm Snapdragon processor, 1GB of RAM, and a 10.1 inch, 1280 x 800 pixel multitouch display. It runs Google Android 2.2 with Lenovo’s “LeOS” software riding on top, and comes with a 2MP front-facing camera and 16GB to 32GB of storage. It supports Bluetooth and WiFi, but not 3G — which is odd, since it has a SIM card slot.

The tablet is a hair thinner than the original iPad at 13.3mm thick  (compared with 13.4mm for the iPad), but that makes it quite a bit thicker than the iPad 2 which will measure just 8.8mm thick.

The Lenovo LePad weighs about 1.7 pounds, which also makes it a tiny bit heavier than the original iPad, which isn’t surprising since it also has a slightly larger screen.

The LePad has rounder corners than the iPad and a two-tone design on the back, with plastic around the edges and a brown leather panel on the back.

You can check out a few videos after the break showing the LePad’s custom software, on-screen keyboard, web browser, and other features.