The company hasn’t officially announce the Legion Play yet, and might never do so, but a set of  images found on the Lenovo website indicate that the company was at least considering introducing the handheld game console earlier this year. It’s one of two mobile gaming device I found hidden on Lenovo’s website. 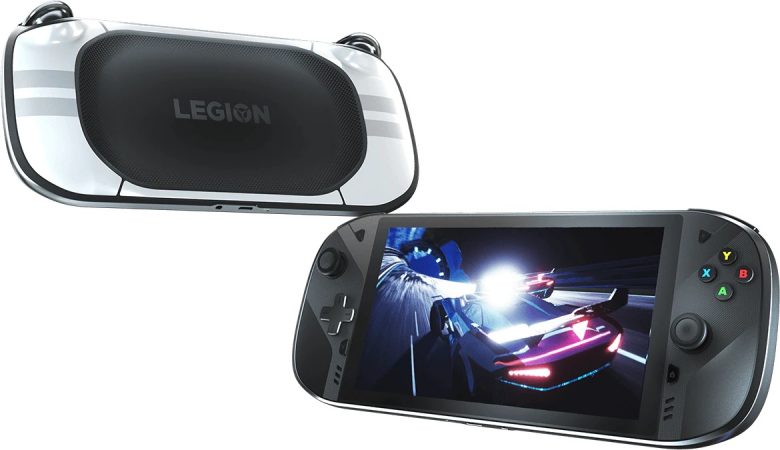 The images were uploaded to the Lenovo Germany and Lenovo Japan websites, where they were supposed to be part of the company’s Mobile World Congress 2021 showcase. When MWC came around this summer, Lenovo never actually introduced the Lenovo Legion Play, and it’s not visible on the company’s MWC websites… but if you search the source code for the page, you’ll find links to four images, as well as the following text description:

I’m not sure why Lenovo refers to the display as “bezel-less” when there are clearly thick bezels around all sides, but then again, the company chose not to actually unveil the Legion Play at MWC, so maybe it doesn’t matter all that much what the hidden promotional text on the company’s website says. It’s possible the Legion Play just isn’t ready for prime time yet, so the company will give it an official launch at a later date. But it’s also possible it’s just a concept the company was working on, which will never actually be released.

For now, we can see that the pictures show what appears to be a handheld gaming device with a screen surrounded by game controllers on the left and right sides. There are two analog sticks, a D-Pad, X, Y, A, and B buttons, Shoulder buttons, and at least a few other function buttons.

On the bottom of the Legion Play, there’s a USB-C port, headset jack, and built-in microphone that you can presumably use for voice chat even when you don’t have a headset. There does not appear to be a camera.

While the Legion Play has a custom user interface designed to focus on gaming, it’s pretty clear that the software is Android-based thanks to a Google Play Store icon. There are also icons for YouTube, Google Drive, and Chrome as well as NVIDIA’s GeForce Now game streaming service.

Theoretically the Legion Play could be a more affordable device than gaming phones, like the company’s own Lenovo Legion Phone Duel series, since the Legion Play wouldn’t  need the cellular hardware necessary to make phone calls or connect to mobile data. But since we don’t know anything about the specs, (or whether Lenovo actually plans to make this thing), there’s not really too much point in speculating about the price.

Speaking of gaming phones, here’s a fun fact: the Legion Play wasn’t the only device hidden in Lenovo’s MWC website. There’s also a concept phone called the Lenovo Legion Phone Duel H20 Edition. I’d be very surprised if it ever sees the light of day, as it’s a water-cooled smartphone with a very, very bulky cooling system attached to the back of the phone. Here’s how Lenovo describes it:

“The Lenovo Legion Phone Duel H2O Edition is a water-cooled concept of the Legion Duel 2. Adding the active Twin Turbo-Fan was already a bold move, but bringing water cooling to a mobile phone is the perfect solution to dissipate heat and improve the device’s stability in high-performance mode. Featuring the latest processor, this phone is perfectly capable of staying cool and extracting the best performance available. To make it an epic gaming phone, we also maxed out the other specs; it comes with 18GB of ram and 1TB of storage. This product is still in the concept phase.”

This article was originally published October 2, 2021 and last updated October 3, 2021.