Lenovo is adding a touch of business class to its small Windows tablet lineup with the launch of the ThinkPad 8. It’s a Windows 8.1 tablet with an 8.3 inch, 1920 x 1200 pixel display, a quad-core Intel Atom Bay Trail processor, at least 64GB of storage, and support for some interesting accessories.

With a starting price of $399, it’s a bit pricier than other 8 inch Windows tablets, including Lenovo’s consumer-oriented Miix 8. But the new tablet also offers more than most other tablets in its class. 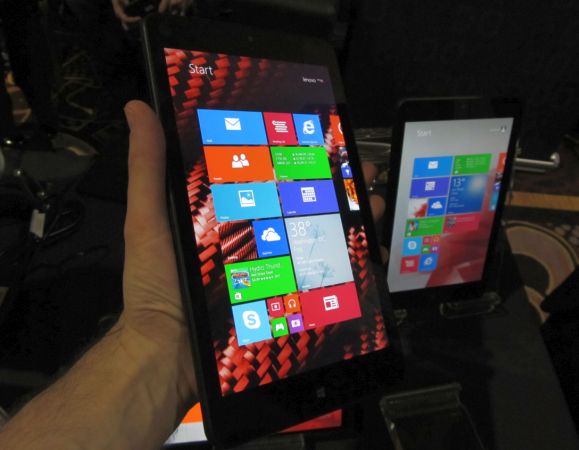 The tablet has an 8.3 inch, 1920 x 1200 pixel display, while most of its peers have 8 inch, 1280 x 800 pixel screens. But thanks to relatively thin bezels around the screen, the ThinkPad 8 doesn’t feel much bigger than other 8 inch Windows tablets.

It also has an Atom Z3770 processors instead of the more common Z3740 chip, and the entry level model ships with 2GB of RAM and 64GB of storage. Lenovo will also offer up to 128GB of storage.

The tablet has a micro HDMI port and a micro USB 3.0 port, letting you hook up an external display, docking station, and other accessories.

One thing Lenovo doesn’t plan to offer is an official keyboard. As I discovered when trying to use the Dell Venue 8 Pro as a makeshift laptop, tablets with small, high resolution displays and Windows desktop software are just too hard to see when you’re not holding them in your hands. But Lenovo figures you can use a docking station to hook up a monitor, projector, or other external device and use the ThinkPad 8 to give presentations or do basic desktop-style computing.

As for handheld use, Lenovo has an optional $49 cover which attaches to the tablet magnetically, turns off the display automatically when the screen is covered, and has a flap on the back which you can fold down to expose the camera without removing the whole cover. Doing that will also launch the camera app.