Lenovo’s latest Motorola-branded smartphones… look like the iPhone X thanks to the slim side bezels and the sizable notch in the top of the display. But in terms of software, the new Motorola One and Motorola One Power are all Android.

In fact, both phones are Android One devices, which means they run near-stock Android software and they should receive regular security and feature updates for at least a few years.

The new phones should be available in select markets starting in October. 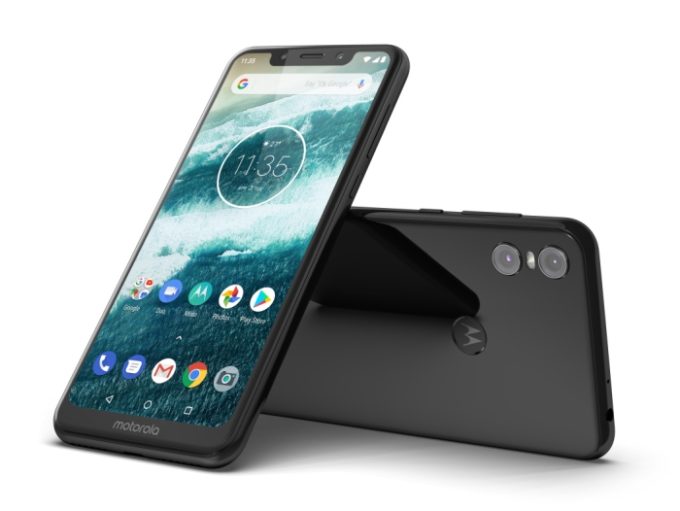 Packing a 5.9 inch, 1520 s 720 pixel display and a Qualcomm Snapdragon 625 processor, this is very much a phone with modern design and mid-range specs. But it does have some nice features including 4GB of RAM, 64GB of storage, dual rear cameras. and Bluetooth 5 support.

The phone should be available in Europe, Latin America, and Asian Pacific countries in October for about 299 Euros ($350 US). There’s no word on if or when the Motorola One will be available in North America.

Motorola equips the phone with a 3,000 mAh battery with fast charging support, and it will ship with Android 8.1 Oreo Android One Edition software. An Andorid 9 Pie update should be available “soon after launch.”

There’s a USB 2.0 Type-C port, a headset jack, a fingerprint reader (on the back of the phone), and a microSD card reader. The rear cameras include a 13MP camera and a 2MP camera, while the front-facing camera has an 8MP sensor.

This model is a bit bigger, a bit more powerful, and a bit more limited edition: it’s only expected to be available in India at launch, and Motorola hasn’t announced the price yet.

Like its smaller sibling, it has 4GB of RAM, 64GB of storage, a microSD card reader, headphone jack, and rear fingerprint sensor.

via Motorola and GSM Arena