A few months ago an unannounced Lenovo tablet called the Yoga 10 showed up at the FCC with a model number of B8000-F. Now that tablet appears to be up for order in Germany, along with a model called the B6000-F.

They both appear to be budget Android tablets, with 10 inch and 8 inch screens, respectively. 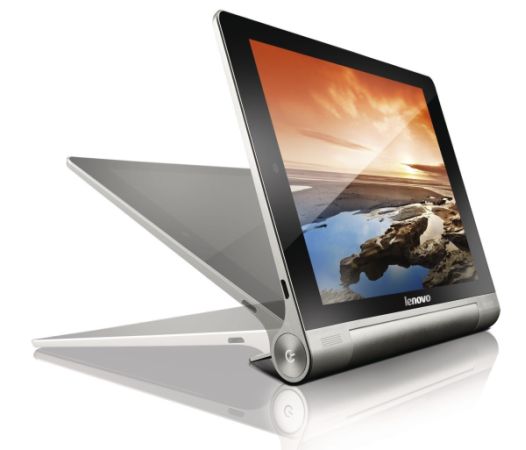 Neither new tablet is wearing the Yoga label anymore, and they don’t exactly look like the company’s Yoga Windows tablets, which look like laptops until you push back the screen 360 degrees so that it’s resting behind the keyboard.

But Lenovo’s new 8 and 10 inch tablets do share one thing with the Yoga series: They’ve got some flexible bits that let you use these tablets in unusual ways.

While most tablets these days are pretty much flat, the Lenovo IdeaPad B6000-F and B8000-F are thicker on one side than the other. That’s because there’s a sort of cylinder along one side with front-facing speakers built into it as well as the hinge for an adjustable kickstand.

You can pull out the stand and prop up the tablet on a desk or table for watching videos, making video calls, or just about anything else. I suppose you could even plug in a keyboard and mouse and pretend the tablet’s a rather tiny all-in-one PC if you really want.

Both tablets have 1.2 GHz MediaTek MT8125 quad-core processors, 1GB of RAM, 16GB of storage, and Android 4.2 Jelly Bean software. They also both have 1280 x 800 pixel displays, which means you’ll have more pixels per inch on the smaller tablet than on the 10 inch model.

There’s no word on if or when either tablet will be available in the US.