Basically it has the specs of a decent smartphone, which makes it pretty good by Android tablet standards.

Also pretty good? The price… at least in China, where the tablet is launching initially. It’s up for pre-order there for ¥ 2499, or about $390. The tablet should be available in China starting May 31st. 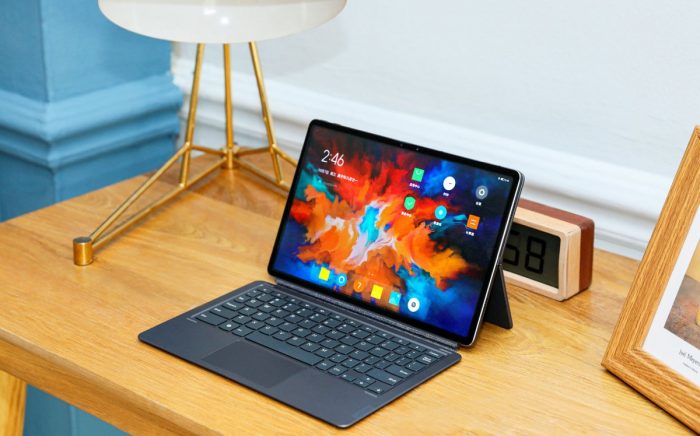 There’s no word on if or when this model will be available in other countries, but I wouldn’t be surprised if it carries a slightly higher price tag in the Western Hemisphere. But it still seems like a lower-priced alternative to the new 13 inch Yoga Pad Pro, which is selling for ¥ 3299 ($515).

While the larger tablet has more memory and storage, plus a few nifty features including an HDMI input and a kickstand that also works as a handle or hanger, the smaller tablet has a smaller, higher-res OLED display with a higher refresh rate.

The Lenovo Pad Pro’s other specs include a 13MP + 5MP rear cameras (the lower-res camera has a 120-degree wide-angle lens), an 8MP front-facing camera plus a ToF sensor for face recognition, a side-mounted fingerprint sensor, four JBL speakers, dual microphones, an 8,400 mAh battery with support for 20W fast charging, a USB 3.1 Type-C port, and a microSD card reader.

There’s also a set of pogo pins on the bottom of the tablet that can be used to connect an optional keyboard cover. And the Lenovo Pad Pro also supports pen input if you pick up an optional pressure-sensitive stylus.