Motorola’s 2016 flagship smartphones have a new design, a new name, and one major new feature: support for a series of modules that expand the phone’s functionality, called MotoMods.

Motorola’s Moto Z Force, meanwhile, is a bit thicker, but has the company’s Shatter Shield technology, which means the screen is guaranteed not to break under any conditions and a larger 3,050 mAh battery (compared with the 2,600 mAh battery on the thinner model).

And both phones have 16 pins on the back that allow you to attach MotoMods. 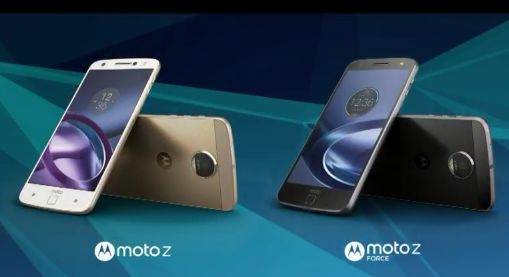 Like the Moto X smartphones they replace, the new Moto Z phones will be available through the Moto Maker tool, which lets you customize the design of your phone before placing an order.

One feature the phones don’t have? A 3.5mm headphone jack. Instead you can plug an audio adapter into the USB-C port if you want to use old-school headphones. Motorola will include an adapter in the box.

It’s the MotoMods which are the hallmark feature of the new phones, though. They connect to the back of the phone magnetically and start working without the need to reboot your phone or plug in any wires.

Some of the first include:

During a demo, Lenovo showed how you can start playing music on the phone’s built-in speaker, and switch to the JBL Soundboost speaker almost immediately after it was connected to the back of the phone. There’s no configuration required.

Motorola is partnering with companies like Mophie, Incipio, and JBL on these modules, but the company is also launching a developer program for companies interested in making additional modules.

The company isn’t exactly the first to develop a phone with modular capabilities. The Fairphone 2 was the first somewhat modular phone to hit the market, followed by the LG G5. Later this year, Google’s Project Ara will join the modular smartphone race. Each has a different approach toward modularity, and it remains to be seen just how big an ecosystem will develop around any one platform. But Motorola says MotoMods developed for the first Moto Z phones will also be compatible with future phones in the series.

The phones also support Style Shells if you just want to add a custom color or material to the back of the phone.