What do you get if you take the Lenovo IdeaPad Yoga 13, shrink the screen, scoop out the Intel Ivy Bridge processor and Windows 8 operating system and replace it with an NVIDIA Tegra 3 CPU and Windows RT?

You get the Lenovo IdeaPad Yoga 11 — a Windows RT tablet which will be available in December for $799 and up. 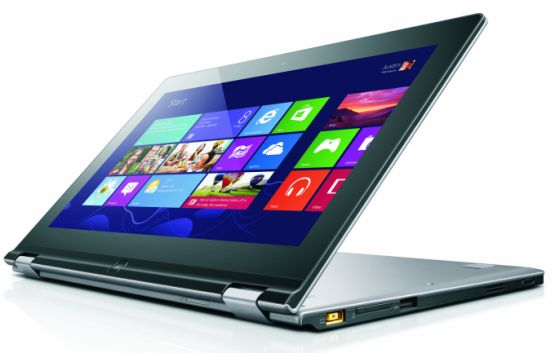 Like its 13 inch sibling, the Yoga 11 gets its name from its flexible hinge. You can use the computer in laptop mode. Or you can push the screen back until its resting on on the base of the computer, letting you pick up the device and use it like a tablet.

That should be a little easier to do with the smaller model since it’s thinner and lighter than the Yoga 13 — although it’s not nearly as light as a tablet that doesn’t have a keyboard attached.

That could make the $799 starting price a bit tough for some to swallow, but the Yoga 11 brings more to the table than most Windows RT tablets thanks to the built-in keyboard and large battery, both of which are included in the base price.