Lenovo’s IdeaTab S2109 is a mid-range Android tablet that has a dual core processor, 1GB of RAM, an Android 4.0 operating system. 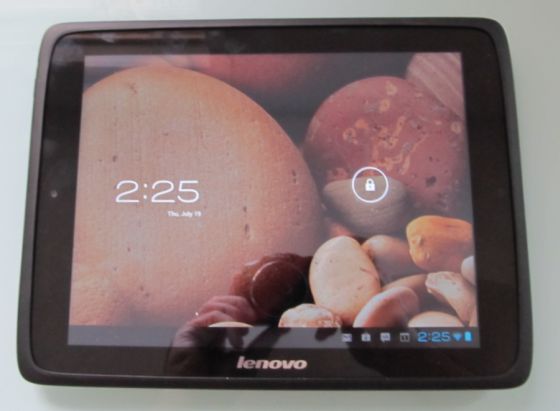 On the one hand, this gives the tablet an iPad-like feel, and makes reading web pages, magazines, and eBooks relatively comfortable. I particularly find full-age comic books look better on a 9.7 inch screen than a 7 inch display.

On the other hand, widescreen videos won’t fill the screen, and some Android apps may look funny — although I haven’t found any problem apps in my tests.

Priced at $311 and up, Lenovo’s tablet costs over $100 more than a Google Nexus 7 even though Google’s tablet has a faster processor, higher resolution display, and newer operating system. But there are a few good reasons to consider the IdeaTab S2109, including its larger screen and better speakers.

Lenovo loaned me a 16GB model for the purposes of this review.

Like most tablets, the front of the device is virtually all screen… and bezel. There’s a black border around the 9.7 inch display which gives you something to grip. On the bottom of the screen there’s a Lenovo logo, and on one side there’s a 1.3MP front-facing camera for video chat. 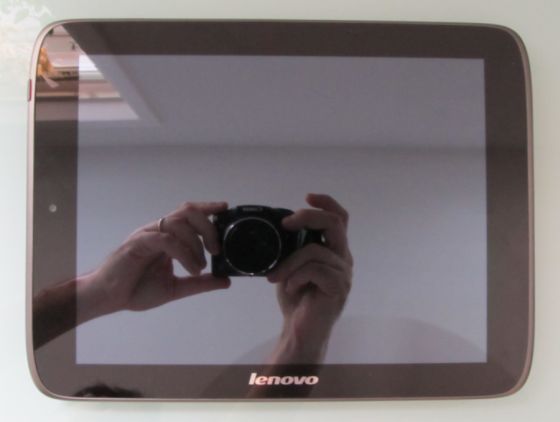 The screen is an IPS display with a 178 degree viewing angle, and pictures, video, games, and other graphics looked pretty good when viewed from almost any angle.

You shouldn’t have any problem watching a video or reading in bed, no matter how you hold the tablet.

The screen features a capacitive touch panel with support for up to 5 inputs at once. While some higher-end devices have 10-point multitouch screens, 5 is more than enough for most activities.

I didn’t have any problems typing with an on-screen keyboard, playing games, or surfing the web or viewing pictures using pinch-to-zoom.

The sides and back of the tablet are covered in plastic with a “gunmetal gray” finish. 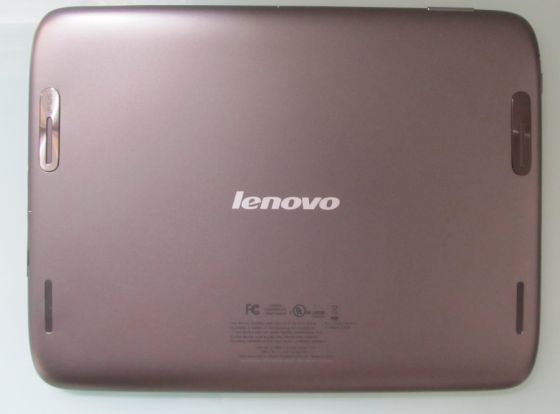 On the back you’ll find one of the S2109’s most distinctive features: the speakers. There are four of them.

As far as I can tell, all four 0.7 watt speakers work all the time — but when you shift the tablet from landscape to portrait mode or back again, the tablet will automatically determine which speakers  are on the left and which are on the right, to keep the stereo sound coming.

The speakers are SRS certified, and Lenovo includes SRS audio enhancement software. While I wouldn’t use the IdeaTab S2109 to replace a home stereo system, it does sound much better than most Android tablets I’ve tested… and better than most inexpensive laptops too, for that matter.

Audio is reasonably loud (for a small tablet), and offers a little bass. If you want anything more than that you’re going to want to plug in headphones or external speakers.

On one end of the tablet there’s a headset jack and a power button.

The other end has a power jack, micro HDMI port, micro USB port, and a microSDHC card slot.

There’s a volume rocker at the top of the tablet.

Harder to spot are the 3-axis gyroscrope, digital compass, ambient light sensor, and accelerometer, but the tablet has each of those, as well as 802.11b/g/n WiFi, Bluetooth 3.0, GPS, and an FM tuner (which you can only use to listen to FM radio when you plug in a headset and use the cable as an antenna).

Lenovo also includes a free cover which protects the back and sides of the tablet from wear and tear.

It also has a rubbery texture and a bumpy pattern on the rear which makes the tablet much easier to grip. The cover is slim and light, so it won’t add much weight or thickness to the tablet.

The cover also won’t protect the glass screen from scratching or shattering, so if you plan to slip the tablet into a bag with your car keys or expect to drop it on the floor, you might want to invest in a padded case. 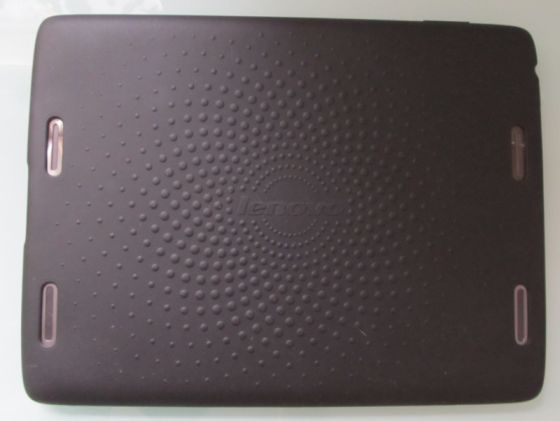 But it’s nice to see a manufacturer include any sort of protection at all, and the Lenovo cover fits the tablet snugly while proving cut-outs for the speakers and ports. The bumpy back area does have a tendency to collect dust though.

Under the hood, the Lenovo IdeaTab S2109 has a 1 GHz TI OMAP 4430 ARM Cortex-A9 dual core processor. That’s the same processor you’ll find in an Amazon Kindle Fire or Barnes & Noble NOOK Tablet, which explains why Lenovo’s tablet scores about the same as those tablets in benchmarks.

The IdeaTab S2109 does have 1GB of RAM, which is about twice what you’ll find in the Kindle Fire, but you’d be hard pressed to notice the difference in performance.

That’s not a bad thing though — the OMAP 4430 CPU is no slouch. It’s more than fast enough to handle pretty much any app from the Google Play Store you can throw at it, including 3D video games.

HD video playback is also smooth, as long as you’re watching a video in a supported format including H.264, Mp4, MPEG-2, or VP8. Third party media players such as MoboPlayer may be able to handle some unsupported formats, but since they’ll have to rely on software decoders, video playback for HD movies may look choppy.

But the Android user interface never felt particularly slow, and while some apps take longer than others to launch, once they’re up and running every game I tested ran smoothly — likely because most Android devices have even slower processors than the OMAP4 chip int he S2109. 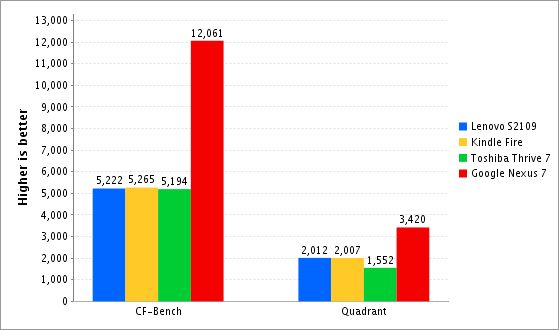 On the other hand, if you want proof that the tablet is using last year’s chip, all you need to do is throw a Google Nexus 7 into the mix. Despite the fact that Google sells the tablet built by Asus for just $199, or more than $100 less than Lenovo’s tablet, the Nexus 7 runs circles around the the S2109 in benchmarks.

The Nexus 7 scored twice as high in the CF-Bench test of general performance, and did almost as well in the Quadrant benchmark. That’s largely thanks to the NVIDIA Tegra 3 quad-core processor in the Asus tablet, although the Android 4.1 operating system may also play a role. Lenovo’s tablet runs Android 4.0.

The S2109, on the other hand, achieves scores that are virtually identical with those you get from the Amazon Kindle Fire, another $199 tablet with a TI OMAP4 processor. I also threw in scores for the Toshiba Thrive 7, a tablet with an NVIDIA Tegra 2 dual core processor which was released early last year.

As you can see from the results, the Tegra 2 chip isn’t much different from the OMAP4 processor in general performance tests. 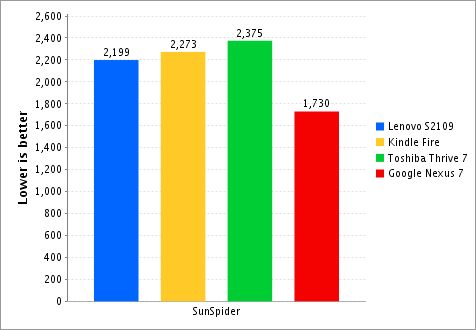 The performance gap wasn’t quite as great when I ran the Sunspider Javascript performance test. This benchmark runs in a web browser and gauges how well a system can handle Javascript.

While Javascript is only one of the measures of how fast a device will be able to load web pages and rich media content on the web, it’s a fairly important one.

In this case, the Nexus 7 still came out ahead, but it led by a smaller percentage. I haven’t found an Android (or iOS) device that can come close to matching the scores you get from a halfway decent computer with a modern web browser and x86 processor though. 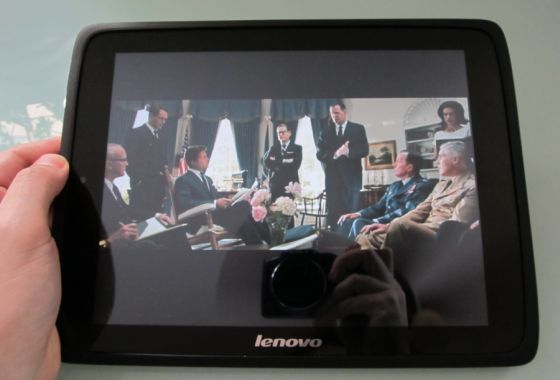 Lenovo packs the IdeaTab S2109 with a 3 cell, 24.8 Whr battery which ran for about 6.5 hours in my test. That involved streaming music over the internet with the display on and brightness set to about 50 percent until the battery up and died.

You may get a little more battery life if you’re just reading eBooks, or less if you’re watching video. Lenovo claims that the tablet supports up to 10 hours of battery life, but I’d say that’s not very realistic under real world conditions.

The Kindle Fire and NOOK Tablet get better battery life, but they also have smaller screens. Lenovo’s tablet also managed to outlast the Toshiba Thrive 7 and several tablets from Velocity Micro that I’ve put through similar tests.

Android 4.0 tablets are a dime a dozen these days. OK, not literally, but it’s not uncommon to find cheap Chinese tablets with Android 4.0 selling for under $100. Still, with the NOOK Tablet and Kindle Fire running Android 2.3, it’s nice to see Lenovo’s latest tablet equipped with Android 4.0. 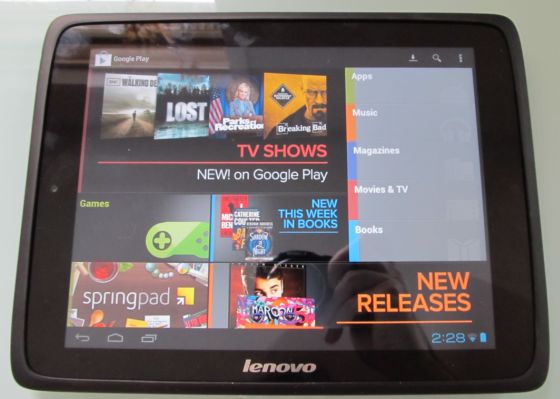 The IdeaTab S2109 is also a Google certified device, which means it comes with the Google Play Store, Google Maps, Gmail, and other Google applications pre-installed.

That hasn’t stopped Lenovo from loading some other software on the tablet though. Some of the apps are more useful than others, and it’s too bad you can’t uninstall the apps you don’t want unless you root your tablet. 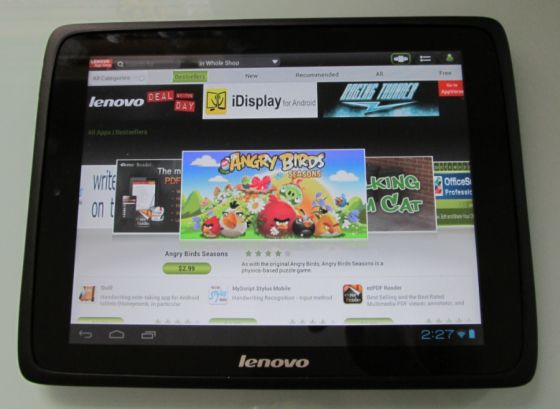 Lenovo’s App Shop is kind of a waste of space. There’s not a single app available from this app store that you can’t also get from the Google Play Store. But I guess you can’t blame Lenovo for trying to get a cut of revenue from app sales.

The tablet also includes Documents To Go for viewing and editing office documents, PrinterShare for sending jobs to a printer, Norton Tablet Security to scan for malware, Skype and ooVoo for voice and video calling, and a few other apps. 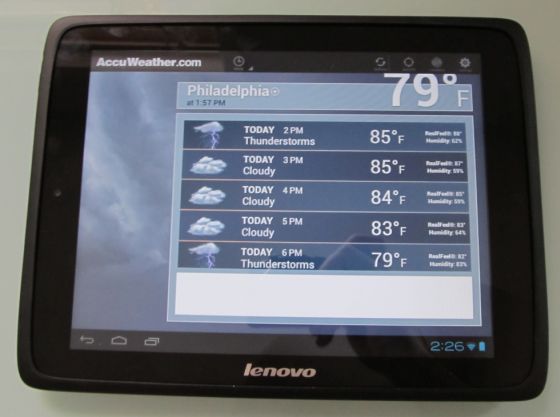 AccuWeather shows you the weather, along with pretty graphics. SugarSync allows you to upload files to the cloud and access files shared from other computers.

And the default keyboard app is actually Go Keyboard, a free keyboard that works much better on phone-sized devices than tablets. You can disable it from the Languages & Input section of the tablet settings and use the default Android 4.0 keyboard instead.

Every single one of those apps is available as a free download from the Google Play Store, so there’s not much value included (for the user) by shipping them on the tablet. 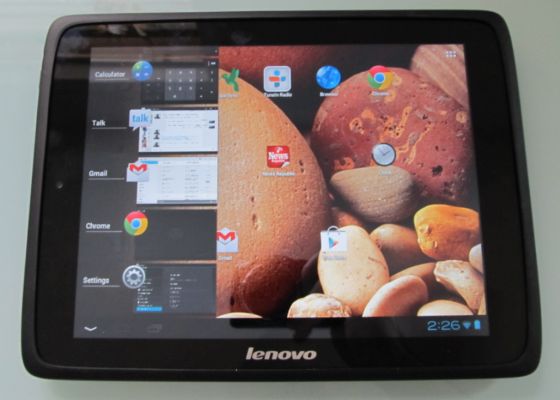 Fortunately they don’t take up too much space, and there’s plenty of room on the tablet for additional apps or media. If you need more space you can always pop in a microSDHC card slot for up to 32GB of additional storage.

As for third party apps downloaded from the Play Store, although most Android tablets have 16:9 or 16:10 aspect ratio displays, I found that most apps I tested on the the IdeaTab S2109 looked just fine on the 4:3 screen. That included video games, web browsers, social media apps, and more.

While it’s not the fastest tablet or cheapest tablet around, the Lenovo IdeaTab S2109 is a decent tablet with above average speakers. The included case is a nice touch, and if you really can’t stand widescreen displays, the S2109 is one of the only tablets available from a big-name PC maker to feature a 4:3 aspect ratio display. 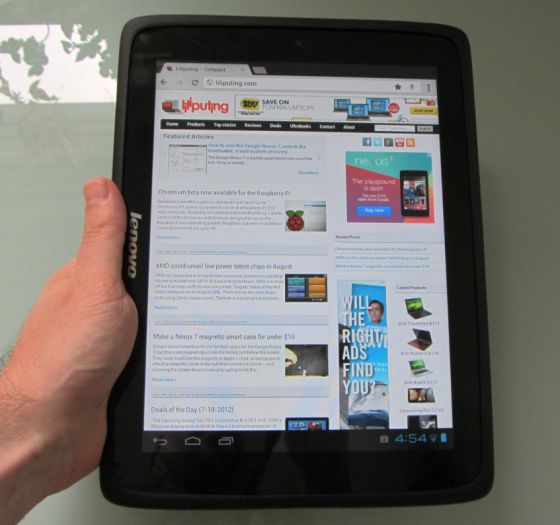 Lenovo often sells an 8GB IdeaTab S2109 for as little as $311, but the tablet technically has a list price of $399, and I’ve regularly seen Lenovo sell it for $389. If you decide to buy this tablet and that’s the best price available, wait until it goes on sale before adding it to your cart. It’s a much better buy at $311 than at $389.

But if you don’t need the 4 speakers or the larger (and lower resolution) display, it’s hard to see why you would spend $311 or more on the Lenovo IdeaTab S2109 when you can pick up a Google Nexus 7 for $199.