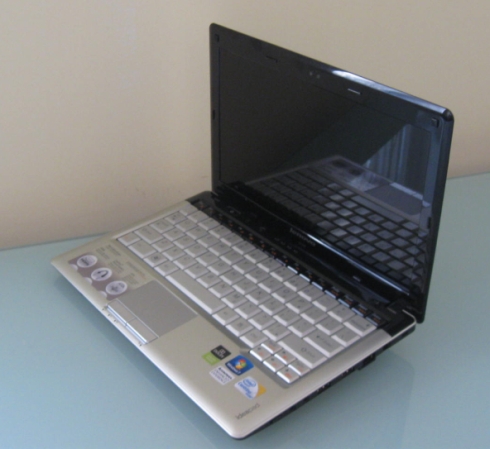 There are a lot of things to like about the IdeaPad U150. It has an distinctive textured lid, an attractive two-tone keyboard, and a combo eSATA/USB port, which is something you won’t find on a lot of ultraportable laptops. But there are a few down sides as well. While the laptop gets decent battery life, it doesn’t last as long as I’ve come to expect of a laptop with an Intel CULV processor. And while the keyboard is attractive, I found it mildly uncomfortable to use.

, but there’s also a $649 model with a slower processor, less RAM and storage.

The Lenovo IdeaPad U150  is an attractive thin and light laptop. It’s textured lid features a raised pattern that is pretty good at resisting fingerprints, although I did notice that after handling the notebook for a while you could see some smudges. With a 6 cell battery, the notebook measure 11.4″ x 7.6″ x 1.3″ and weighs about 3.3 pounds. 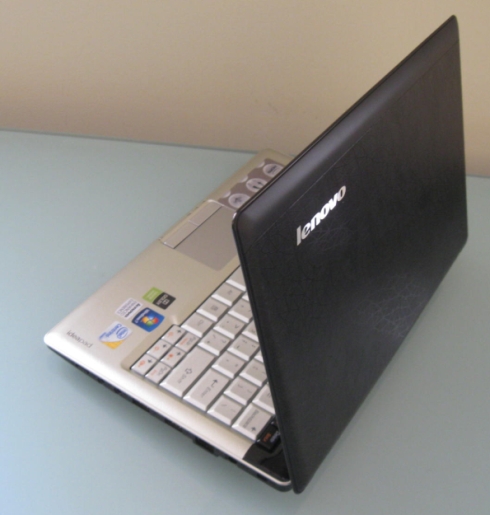 Around the sides of the laptop you’ll find VGA, HDMI, and audio ports as well as 2 USB ports and a combination USB/eSATA connector.

There’s a switch on the right side for toggling the WiFi on and off, and in the front of the laptop you’ll find an SD card slot.

The IdeaPad U150’s 57Whr battery is a rather unusual shape, but it’s designed to take up less space on the bottom of the laptop that many 6 cell batteries, which means the computer doesn’t tilt uncomfortably when placed on a table. The battery also doesn’t stick out of the back of the laptop like the battery on the Lenovo IdeaPad S12. 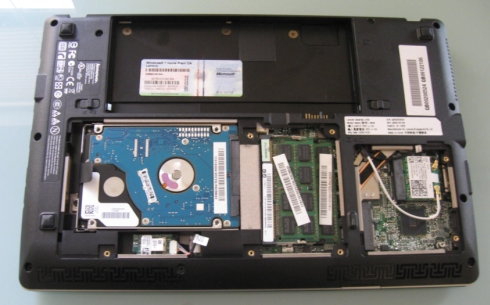 There are two large access panels on the base of the IdeaPad U150. One makes it easy to replace or upgrade the RAM and hard drive, while the other provides access to the WLAN hardware and a spare expansion slot. The U150 has two RAM slots, which makes memory upgrades a breeze. 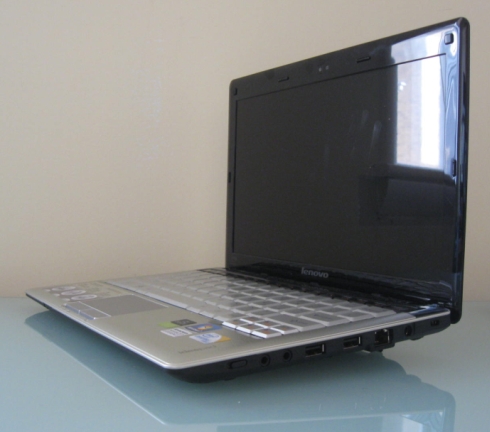 The 11.6 inch, 1366 x 768 pixel display has a shiny black plastic bezel around it. Like the bezel, the screen is glossy, which means that when the display is dark, the computer can serve double duty as a mirror in bright environments. While that could come in handy if you’re shaving, it’s not something I normally consider a selling point. Fortunately, Lenovo gives you a fair bit of control over the backlight, and I didn’t have any real problems reading the screen in most situations. I wouldn’t recommend using the laptop in direct sunlight though.


The keyboard features a distinctive two-town design. The top row of keys, which includes the Fn, Esc, and Delete keys as well as a few others are in black with white lettering. The rest of the keyboard is a gray/silver color with black and/or orange letters. My only complaint with this layout is that I keep forgetting the Delete key is in the top row just above Backspace. And since it’s hanging out with a bunch of keys that I don’t use very often such as insert and Print Screen, it always takes me a moment to find the button. This probably wouldn’t be a problem if the IdeaPad U150 were the only laptop I used, but since it’s not… it is. 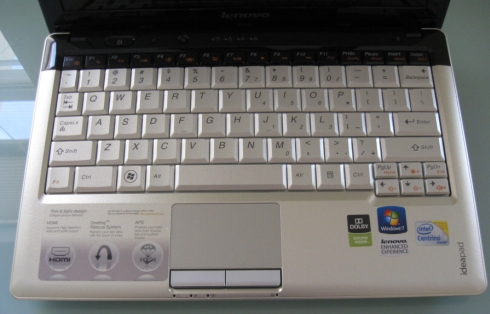 Another problem I have with all Lenovo keyboards is the placement of the Ctrl and Fn keys. Most laptops put the Ctrl key in the bottom left corner of the keyboard and place the Fn key to its right. Lenovo puts the Fn key on the outside and the Ctrl key next to it on the right. I had to spend about a week using this keyboard before I stopped hitting Fn+C every time I wanted to copy text or Fn+T when I wanted to open a new browser tab. Again, this isn’t a problem if you’re used to Lenovo keyboards. But if you’re not, it will take some getting used to.

Finally, the keys just don’t feel as snappy and responsive as I’ve come to expect from a keyboard. Laptop Magazine describes the U150 keyboard as “mushy,” and I have a hard time coming up with a better word than that. I described the keys as “cheap” feeling in my unboxing video, and several readers took issue with that characterization. And cheap’s probably not the right word. I’m sure the plastic in these keys costs just as much as that in most other low cost notebook keyboards. But I generally didn’t find typing on the Lenovo IdeaPad U150 to be all that pleasant. The keyboard is also a little on the noisy side.

I was able to achieve a score of 90 words per minute in an online typing test. While that’s not bad, it’s about 10 word per minute slower than I’ve gotten on several other keyboards. Your result may vary.

Above the keyboard are three buttons: a power button, a mute button, and a little key with an arrow on it that you can press to fire up Lenovo’s backup and restore software. 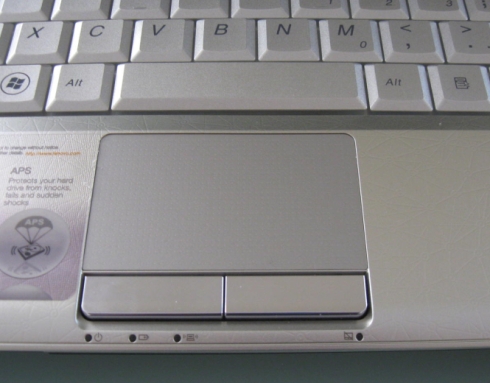 The touchpad is nice and wide and features two distinct buttons for left and right clicks. The buttons feature a soft touch. In other words, “click” might not be the right word to use, as you probably won’t hear anything at all when you pres the buttons below the keyboard.

I found the touchpad had a little more friction than I like, which made it a tad difficult to use. But not too difficult. It supports multitouch gestures such as two-finger scrolling and pinching to zoom in some applications.

The demo unit I tested came with a 1.3GHz Intel Core 2 Duo SU7300 processor and GMA 4500MHD graphics. That’s the same chipset found in the Asus UL20A which I reviewed last year. For the most part, the two laptops notched similar scores on a series of tests I ran, but the U150 consistently came in just a little behind the UL20A. Both netbooks are considerably faster than an average 10 inch netbook with a low power Intel Atom processor. But the U150 is designed to be a thin and light machine with reasonably good battery life and if you’relooking for a high end gaming machine, this isn’t it.

With that in mind, here’s how the IdeaPad U150 stacks up against a few similarly priced thin and light machines with similar specs. 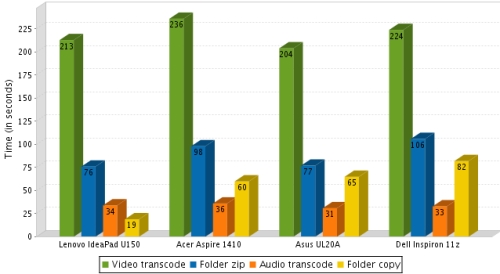 The tests involve transcoding a 4:34 video file and a 13:24 audio file and copying and zipping a 478MB folder containing 2186 files. I have no idea why the IdeaPad U150 was so much faster than the other laptops at the folder copy test, but you can see that on the CPU-intensive tasks such as transcoding files the U150 was a few seconds behind the Asus UL20A. 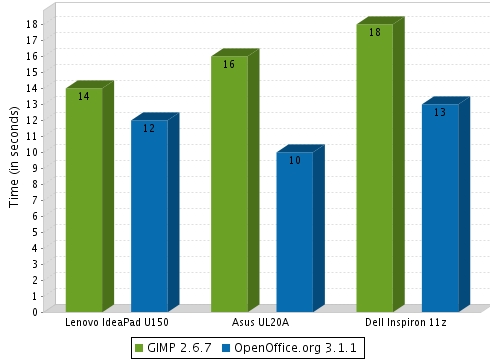 The results were a bit more mixed when I ran a test to see how long it takes to open two notoriously slow-loading programs: GIMP and Openoffice.org. While the Ideapad U150 opened image editing application GIMP faster than the UL20A, it was slower to launch OpenOffice.org. Both computers were noticeably faster at launching both apps than the Dell Inspiron 11z which has a slower processor. 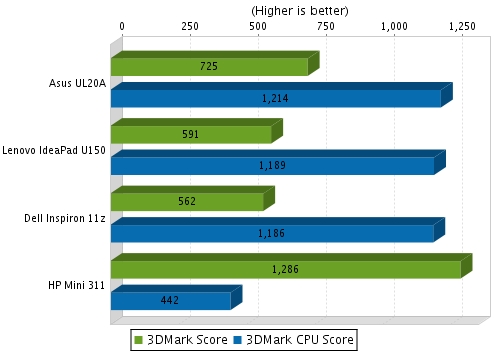 While the IdeaPad U150 has the same CPU and GPU as the Asus UL20A, it got a significantly lower score on the 3DMark06 graphics benchmark. In fact, the U150’s score was closer to the Dell Inspiron 11z’s than to the UL20s, even though the Dell laptop has a slower processor. I added the results for the HP Mini 311, which has NVIDIA ION graphics. While the HP notebook has a much slower Intel Atom N270 CPU, the high performance graphics makes a huge difference when it comes to playing games.

That said, the Lenovo IdeaPad U150 was able to handle a few 1080p HD video clips in my tests, including HD Flash video (once I installed Adobe Flash Player 10.1 beta). The computer feels reasonably fast and is more than capable of handling most office software, and a reasonable level of multitasking such as surfing the web with multiple browser tabs open while listening to music in a media player application and chatting with friends or colleagues over an instant messenger. The U150 may not be the fastest machine around, but it’s got enough oomph to get some work (and play) done.

The IdeaPad U150 comes with a 6 cell, 57Whr battery. Lenovo says it should be good for up to 7 hours of run time, but I typically got about 5 hours of battery life before the computer shut itself off. That was when surfing the web with WiFi on, and maybe watching a handful of short YouTube videos. If you plan to watch a continuous loop of video, expect the battery to run down more quickly. 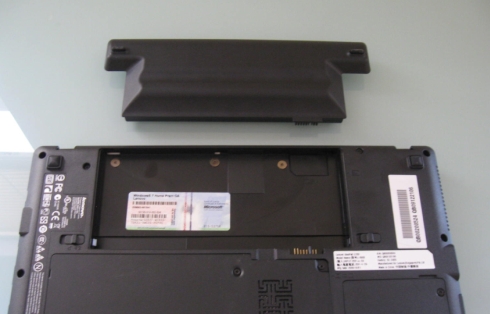 The spec sheet I have says that the laptop is also available with a 3 cell battery, but I haven’t seen that option on Lenovo’s order page. The only real advantage to a 3 cell battery is that it sits flush with the base of the laptop, taking up less space. But the funny-shaped 6 cell battery isn’t really all that cumbersome. 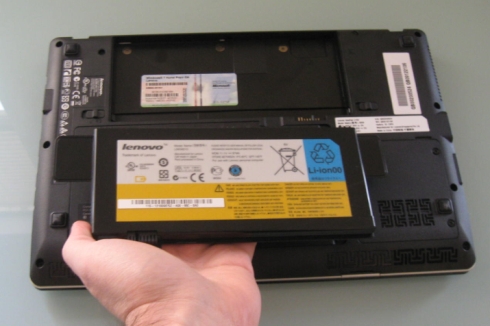 The Lenovo IdeaPad U150 is a good looking thin and light laptop that’s a reasonably powerful alternative to a 10 inch Atom powered netbook. But it’s not the fastest system I’ve tested with an Intel CULV processor, and while it has enough graphics prowess to play some games and watch HD video, it’s not ready to challenge an NVIDIA ION system like the HP Mini 311 in the graphics department. 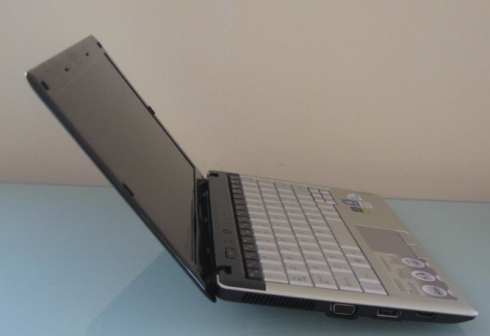 I’ve also come to expect better battery life from notebooks with Intel CULV processor. So while 5 hours is certainly pretty good, I would have been a bit happier if the notebook could run for 6 or more hours on a charge.

But for the most part I’m nitpicking here. The laptop is reasonably portable, responsive, and powerful. The biggest problem is the price tag. With a starting price of about $650, the Lenovo IdeaPad U150 is considerably more expensive than similar laptops from Acer, Asus, Dell, Toshiba, and others. Fortunately Lenovo has a habit of offering coupons that help bring the price down, so if you really have you heart set on the U150, you might want to keep an eye out for a discount code before making a purchase.

For a bit of a closer look at the computer, you can check out a video mini-review below.

8 replies on “Lenovo Ideapad U150 thin and light notebook review”