The Lenovo Flex 5i Chromebook is a convertible notebook with a 14 inch full HD touchscreen display, a 360-degree hinge that lets you use the computer in tablet, tent, or stand modes, and support for up to an Intel Core i5-1235U Alder Lake processor, 8GB of LPDDR4X memory and a 512GB SSD.

In other words, it’s a computer with decent mid-range specs that just happens to run Chrome OS rather than Windows or another operating system. The Flex 5i Chromebook should be available in June for around $500 and up. 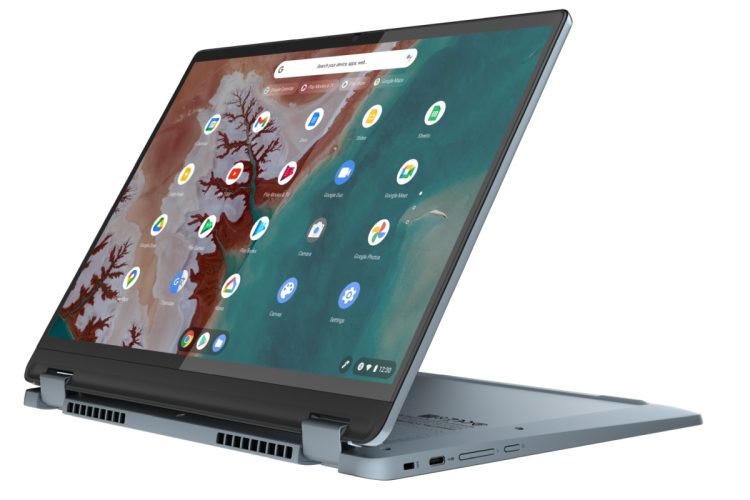 At that price point, you’re likely to get a model with slightly less impressive specs (the notebook is also available with Pentium 8505 and Core i3-1215U processor options, as little as 4GB of RAM, and 64GB or 128GB of eMMC storage).

But no matter which configuration of the laptop you get, the Flex 5i Chromebook has a 1080p display with support for a USI pen, support for WiFi 6E and Bluetooth 5.0, and a selection of ports that includes:

The laptop has stereo 2W speakers, optional support for a backlit keyboard, a fingerprint reader, and a body that measures less than 12.4″ x 9″ x 0.8″ inches thick and which weighs  3.57 pounds.

While Chromebooks have long had a reputation as cheap laptops with entry-level specs, they’ve grown up quite a bit in recent years, with a number of companies including Acer, HP, and Lenovo offering models with the specs to help justify higher price tags. And Chrome OS itself has become a lot more capable as an operating system thanks to support for running Android and Linux apps as well as browser-based web apps.

Lenovo also has a cheaper Chromebook Flex 3i coming in May for $400 and up, but that model has a 15.6 inch display and an Intel Jasper Lake processor.