Thumb keyboards were all the rage a few years ago, with BlackBerry dominating the smartphone space partially because the company had some of the best keyboards. Then came the iPhone and the realization that most people were perfectly happy to tap out letters, numbers, and other characters using on-screen keyboards on mobile devices.

But there’s still at least a little demand for physical keyboards for tablets. One of the most popular Android tablet lines is the Asus Transformer series, thanks to an optional keyboard docking station. And dozens of companies offer third party keyboards for everything from the Apple iPad to the BlackBerry PlayBook.

It looks like Lenovo may have a slightly different approach in the works. 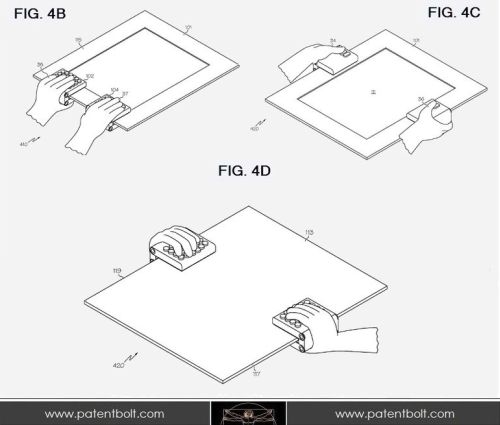 Patent Bolt dug up a patent application from Lenovo detailing a set of hand grips that you can clamp to a table to add a physical keyboard. You can use it to enter text while you’re holding the tablet in your hands.

Because the grips are adjustable you can clamp them onto the sides or bottom of the tablet. And you can type with two hands while holding the tablet in two hands, because the QWERTY keyboard layout is split in half, with the left side on one grip and the right side on a second.

You could also detach the clamps from the tablet, lay them flat on a table and use them like a standard Bluetooth keyboard to enter text when you’re not holding the tablet.

Interestingly most of Lenovo’s diagrams show that most of the characters for the keyboards would be on the bottom of the clamps — meaning you type with your fingers, not your thumbs. If you typically need to look at your fingers while you type, this could be a problem.

The good news is that there’s nothing stopping you from detaching the handgrips and flipping them around so that the keys are facing up.

Lenovo originally filed for the patent in 2010, but the documents were only recently published. It’s possible that the handgrip keyboard will never see the light of day. But it would certainly represent an interesting take on text input for tablets.

You can find more details and pictures at Patent Bolt.