As expected, Lenovo’s first Chrome OS tablet is on the way. The Lenovo Chromebook Duet is a 10.1 inch tablet with a MediaTek Helio P60T octa-core processor, 4GB of RAM, and between 64GB and 128GB of storage.

It also has a detachable keyboard that lets you use the tablet like a laptop — which could make it a lot more versatile than some of the first-gen Chrome OS slates, which were positioned as tablet-only devices.

The Chromebook Duet should be available in May with a starting price of $280. Lenovo says the same device will be sold outside of North America under a different name — the Lenovo IdeaPad Duet Chromebook. 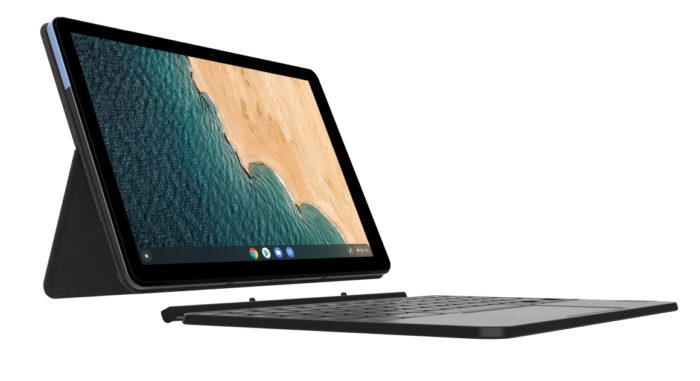 The tablet measures 9.4″ x 6.3″ x 0.3″ and weighs about a pound when used on its own. The detachable keyboard cover adds a little over half a pound and brings the thickness to 0.7 inches.

Lenovo says the tablet’s 1920 x 1200 pixel IPS display supports up to 400 nits of brightness, and you can use an integrated kickstand to stand up the tablet when using it with a keyboard. The stand supports angles up to 135 degrees.

The tablet has a 27 Wh battery and features an 8MP rear camera, a 2MP front-facing camera, a USB 2.0 Type-C port, and a 5-pin connector for the keyboard. While there’s no dedicated audio jack, Lenovo does include a USB-C to 3.5mm audio adapter in the box.