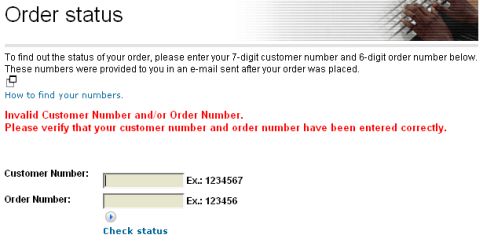 When I heard this morning that Lenovo was beginning to ship the IdeaPad S10 to customers who got their orders in early, I went to check on my order status page. I received the error message above, telling me my order number was invalid.

So I called the sales department and was told that I canceled my order last week. The agent said I called to ask for a status update, was told it would be available by the end of the month, and that I chose to cancel my order. I did no such thing.

I hung up and called the online sales service department, where another agent kept telling me that they had a record of my call in their computer and it was hard for him to believe it could be wrong. I asked if they had the recording (since I heard a friendly message before this call started informing me that the call would be recorded for quality assurance purposes) because I had most certainly not called last week. I was told that’s what the computer records were for, and that there was no way to access the audio recording. In other words, because a sales agent typed into a machine that I had called, they refused to believe that it was possible an error had occurred.

To make a long story short, I was offered the option of placing a new order and getting pushed to the back of the line. Since my primary purpose in ordering a Lenovo IdeaPad S10 had been to write a review, I declined.

Lenovo has seriously botched up the introduction of this machine. Lenovo has pushed back the order date several times without informing customers. The company has been slow to send out review units to computer magazines and web sites. Laptop Magazine just received their review unit today – the same day that customers are reporting the laptop (which was announced over a month ago) began shipping. I placed an order so that I would at least be able to review a  unit as soon as it became available to customers. Now even that doesn’t look possible.

This is not the sort of behaviour that instills confidence in a company. I decided not to place a new order.