The Lenovo Beacon is a device designed to act as both a media center and a network-attached storage device. It features an Intel Atom processor, a Linux-based operating system, and XBMC software comes pre-loaded.

Lenovo’s unusual box includes two 3.5 inch drive bays and supports up to 6TB of storage. The Lenovo Beacon should launch in a few months for $199, but that price doesn’t include storage. You’re expected to supply your own hard drives. 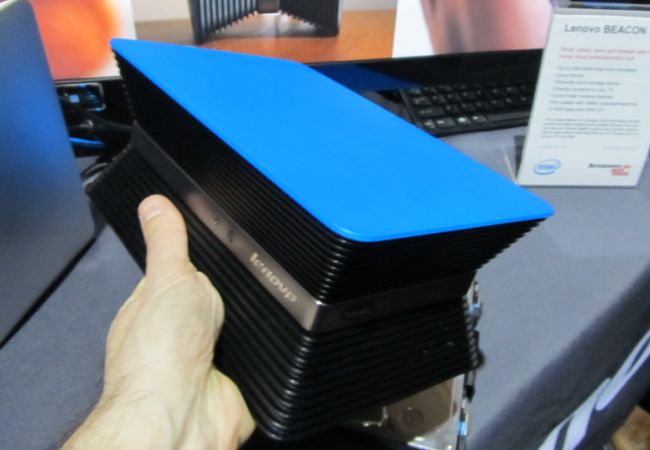 That’s not necessarily a bad thing, since it means you can use any drives you’ve already got lying around or wait until you find a good deal on a high-capacity drive.

There’s a bit of built-in flash storage, and that’s where Lenovo stashes the operating system.

Lenovo equips the device with 2 USB ports, an Ethernet jack and HDMI port. You can hook it up to your home network and your TV, plug in a keyboard, mouse, remote control, or other device and use the included XBMC software to watch videos on your TV.

You can also remote control XBMC using an app on your phone — and this is a fully functional XBMC machine, so you’re not just stuck with playing local media files. You can also install add-ons to access online music, video, or photo sites, among other things.

Lenovo is positioning Beacon as a personal cloud solution, letting users backup files from their PCs, phones, and other devices to a network-connected storage device that they control themselves. But with $199 price tag, easily accessible storage bays, and a Linux-based OS, it could appeal to hardware hackers and home theater enthusiasts as well.