Chinese company LeEco offers a range of products in its home country including smartphones, smart TVs, smart bicycles, and more. Now the company is getting ready to do the same thing in the United States.

LeEco has been showing off some of its China-only products at events in the US since the Consumer Electronics Show in January. This summer the company announced that it was acquiring Vizio, one of the biggest players in the US TV space. And this week, LeEco hired former Qualcomm VP Rob Chandhok to head up LeEco’s North American research and development efforts. Those are just a few of the movies the company has made indicating it’s getting ready to enter the US market.

Oh, and today I got an invitation to LeEco’s US launch event on October 19th. 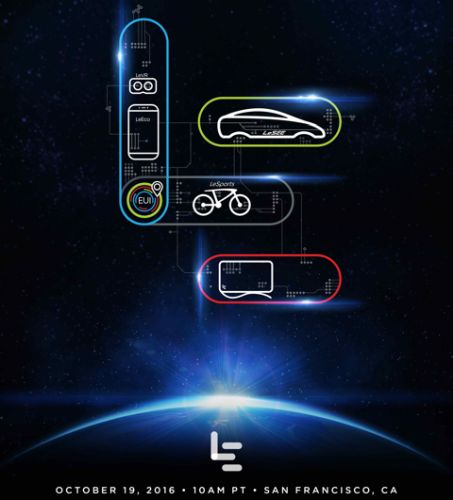 The company hasn’t spelled out exactly which of its products will be available in the United States, but the picture included on the invitation shows a phone, bicycle, TV, and other devices which may be a VR headset and a smart car system.

But LeEco doesn’t position itself as just a company that makes phones or TVs… it creates an ecosystem of products designed to work together.

If that sounds familiar, it’s because that’s the approach taken by Apple… and the approach nearly every other consumer electronics company wants to take, but struggles with in an age when Samsung phones have no problem working with Canon printers and Dell laptops.

In China, LeEco offers a media streaming service and acts as a movie and TV studio as well as a live streaming music service. The company’s internet-connected electronic bicycle and smart TVs are also big in China… but a key reason LeEco has been grabbing headlines in the United States for much of the past year is the company’s head-turning smartphones.

The recently unveiled LeEco Le Pro 3 is a phone with top-tier specs including a Snapdragon 821 processor, up to 6GB of RAM, and up to 128GB of storage. But it has a surprisingly low price tag: in China, the Le Pro 3 sells for between $300 and $450.

There’s no word yet on whether LeEco will be bringing any of its existing phones to the US or if the company plans to launch entirely new models for Western markets. But when I spoke with a representative of the company a few months ago, I was told that LeEco does plan to offer phones in the United States… and with a launch event just a few weeks away, it’s starting to look like LeEco might manager to do that before Chinese rival Xiaomi gets around to bringing its own high-quality/low-cost phones to the States.