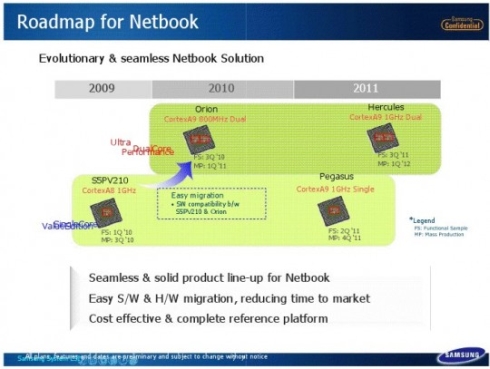 A leaked product roadmap from Samsung shows a series of new ARM-based chips including a 1.2GHz quad core Cortex-A9 chip called the Aquila which is due out in 2012 or 2013. With that much power, it’s a safe bet that this chip won’t just be for smartphones. It could also power smartbooks running Google Android, Chrome OS, Windows CE, or whatever other operating systems can run on ARM-based chips by 2012.

Of course, we might all have flying cars by 2012. In the meantime, it looks like Samsung expects to demo an 800MHz dual core ARM-based processor later this year with mass production scheduled for early next year. For a complete breakdown of the leaked product roadmap, hit up Eee Times. Bear in mind, there’s a lot of time for things to change between now and the end of the roadmap.

It’s also important to keep in mind that there are some pretty key differences between ARM-based chips and x86 chips. In other words, it’s not all about clock speed. In general, ARM-based chips include integrated wireless connectivity, use less power, and offer always-connected capabilities so that you can receive phone calls, text messages, and other communications even when the phone or smartbook is inactive. But these processors aren’t as fast at performing some of the tasks necessary to run a full fledged desktop operating system such as Windows 7 or OS X.  Business Insider had an excellent article on just what ARM Holdings does earlier today. That’s the company behind the ARM infrastructure.