Lenovo is planning to launch at least 16 new ThinkPad laptops and tablets by the end of the year, according to a leaked product roadmap obtained by NotebookCheck. But the roadmap doesn’t just spell out Lenovo’s plans — there are also some clues about Intel’s plans.

According to one image, Lenovo expects Intel to launch its 10nm Tiger Lake chips and lower-power Lakefield processors in September or October. Lenovo products powered by these chips will star to ship sometime around October. 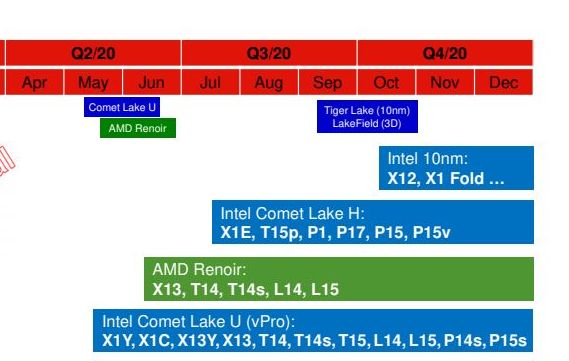 One of those products will be the previously-announced Lenovo ThinkPad X1 Fold Windows 10 tablet with a foldable OLED display and an Intel Lakefield 5-core processor that combines a single Intel “Sunny Cove” high-performance CPU core with four energy-efficient “Tremont” CPU cores.

Another is an unannounced Lenovo ThinkPad X12, which looks like it could be a Microsoft Surface-like computer featuring a 12 inch tablet and a detachable keyboard. It’s unclear if this computer will feature a Lakefield or Tiger Lake chip, but Intel has already said it expects more than 50 laptops with Tiger Lake processors to be available in time for the 2020 holiday season.

Tiger Lake is the follow-up to the 10th-gen Intel Core “Ice Lake” processor family and Tiger Lake chips are expected to be 10nm+ processors with Intel Xe-LP integrated GPUs which should bring a significant graphics performance boost.

Other previously unannounced devices mentioned in the leak include Lenovo ThinkPad X1 Nano and ThinkPad X1 Titanium Windows 10 computers and a new ThinkPad Chromebook aimed at the commercial sector. 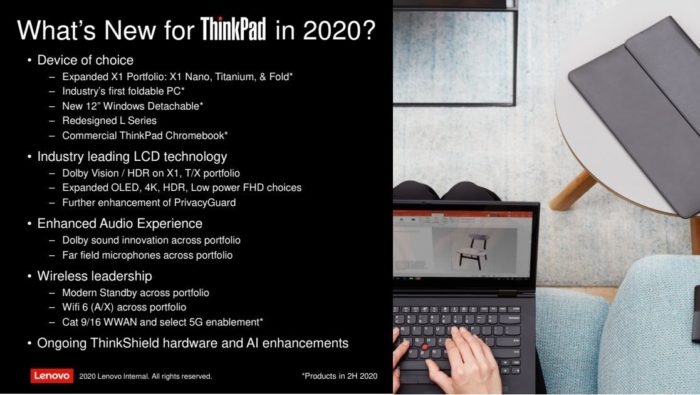 Lenovo may also add some new budget ThinkPads as part of a V series (V is for Value), although there aren’t many details about those models or what features you may lose in order to gain a lower price tag.

You can find more details at NotebookCheck.