So what’s next? According to a leaked product roadmap, Cannon Lake, Coffee Lake, and Germini Lake. That’s a lot of lakes. 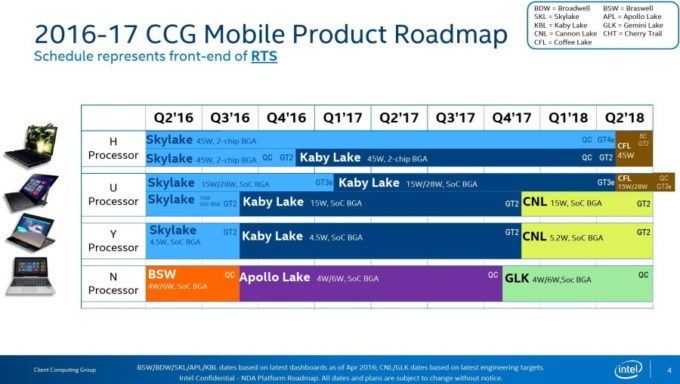 Keep in mind that this roadmap seems to have been drawn up in April, so there’s a chance some plans have changed. That said, let’s take things one at a time:

Now that Intel is positioning its Atom chips as products for IoT, robotics, drones, and other embedded systems, the company’s 4 watt to 10 watt Celeron and Pentium chips are its cheapest, lowest-performance processors for traditional PCs such as laptops, desktops, and 2-in-1 tablets.

Gemini Lake is the code-name for the chips that will eventually replace the Apollo Lake processors coming out this fall. But we’ll have to wait a while before they show up: the first Gemini Lake chips are slated to ship in the fourth quarter of 2017.

At this point there aren’t many details about the chips, other than their code name (which has been floating around for a while), but the product roadmap suggests they’ll be available in 4 Watt and 6 Watt varieties, much like earlier members of the Intel “N” series processor family.

The chips that will eventually replace Skylake and Kaby Lake processors in most portable notebooks are code-named “Cannon Lake,” and according to the roadmap, they’ll also ship in late 2017… possibly a little later than Gemini Lake.

The new chips are expected to introduce a new graphics architecture, and they’ll likely be the first Intel chips built using a 10nm process.

Like Broadwell, Skylake, and Kaby Lake before, the new Cannon Lake chips for mobile devices will be split into two product families: U series chips for mainstream notebooks and Y-series for ultra-low power systems.

What’s new is that it looks like the Y-series chips (which were mostly branded as Intel Core M processors, up until recently) seem to be 5.2 watt chips rather than 4.5 watt processors. Those numbers are a bit flexible though, since Intel allows device makers to adjust the TDP on its chips a bit, so some current Y-series chips might actually use up to 7 watts, for instance, or as little as 3.5 watts.

Something else that’s noteworthy is that the roadmap shows the most powerful Cannon Lake-U chips will be 15 watt processors, which means there won’t be a more powerful 28 watt variant.

Instead, Intel will brand its 28 watt Kaby Lake successor under a different name…

Coming in the second quarter of 2018, Intel’s Coffee Lake chips will likely include Core i3, Core i5, and Core i7 processors that use between 15 watts and 45 watts of power.

Unlike Cannon Lake, the Coffee Lake processors are expected to be 14nm chips.

The 45 watt Coffee Lake-H chips are higher-performance, 6-core processors. These chips are also designed for laptops, but since they generate a lot more heat than Cannon Lake or Gemini Lake chips, you probably won’t see the new H series processors in thin and light notebooks.