Intel doesn’t have a great track record of giving its processors names that are easy to understand. Theoretically you should be able to look at the name and have a rough idea of the price and performance you should expect from a processor, but in recent years the waters have been kind of muddy: some Celeron chips are slower than Atom processors, for example.

Now it looks like things are about to get even more confusing. Benchlife.info has published leaked documents related to Intel’s upcoming 7th-gen Core “Kaby Lake” processors and low-power “Apollo Lake” chips. If those documents are accurate, Intel is planning to shake up its naming conventions so that some Core i3 chips will probably offer more performance than other Core i7 chips. 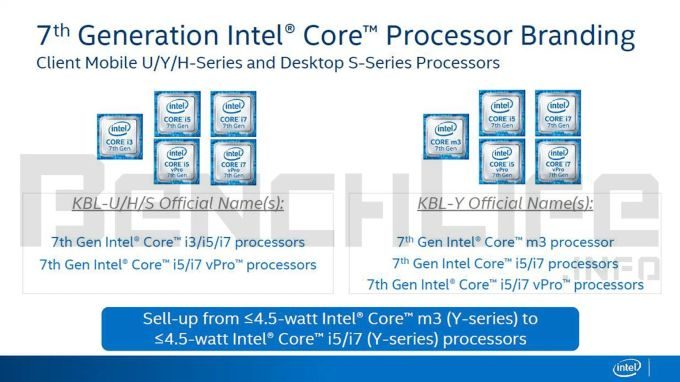 Here’s what to expect:

Intel recently discontinued its Broxton line of processors for notebooks, laptops and tablets. That means we won’t see any new chips with the Atom name this year.

But the upcoming Apollo Lake chips are based on the same architecture as Broxton, and they’ll be branded under the Celeron and Pentium names. When Intel launches these chips later this year, they’ll be the cheapest, lowest-performance chips for tablets, notebooks and desktops.

These chips will have Intel HD 500 series graphics, based on the same GPU technology used in 6th-gen Intel Core “Skylake” processors.

Intel has been using the Core i3, Core i5, and Core i7 names for its good, better, best chips for a number of years. But these are broken up into a few different families.

H and S series chips are power-hungry, high-performance processors that are typically used in desktops.

The Core M processors use just a little more power than Atom chips, but offer significantly better performance. But they draw much less power than U series chips, which is why they’ve been popular choices for PC makers developing thin, light, and fanless computers.

Intel fleshed out the Core M family in 2015 with the launch of Core M3, Core M5, and Core M7 Skylake chips.

But according to Benchlife.info, that changes with Kaby Lake: Intel will keep the Core M3 name, but more powerful Y series chips will be branded as Core i5 or Core i7 processors.

That means they’ll have names that are similar to the names for U series chips… and you’ll probably have to look closely at the model number (and look for a Y at the end) to know if you’re looking at a 4.5 watt Core i5 chip or a 15 watt Core i5 processor.

All of the Kaby Lake chips will be based on the same 7th-gen Intel Core architecture, and they’ll all have Intel HD 600 series graphics. But Y series chips will be much slower than U, H, or S processors.

Here are some of the first Kaby Lake processors we can expect to see: