Fujitsu had already revealed plans to launch new tablets running Google Android and Windows 8 this year. Now we have a few more details about the upcoming devices thanks to a leaked product roadmap obtained by Slashgear. 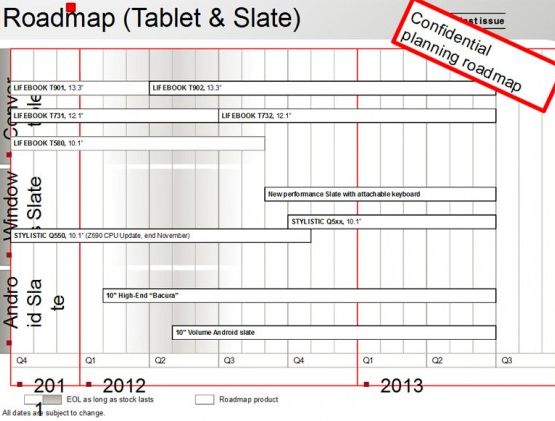 There at least two new Windows slates and two new Android tablets on the roadmap:

It’s likely that the new Windows tablets, which are scheduled to launch in late 2012, will ship with Windows 8.

Fujitsu already offers a Windows 7 tablet called the Stylistic Q550. It has an Intel Atom Z670 processor, but it looks like the company plans to update the slate with an Atzom Z690 processor in November.

Fujitsu also has a line of convertible tablet-style notebooks in the works. The Lifebook T732 will have a 12.1 inch display and will replace the current LifeBook T731 model. The Lifebook T902 is a 13.3 inch replacement for the T901.

The roadmap seems to show the LifeBook T580 10 inch convertible tablet being phased out. Fujtisu will probably count on its upcoming tablet with an attachable keyboard to replace this model.