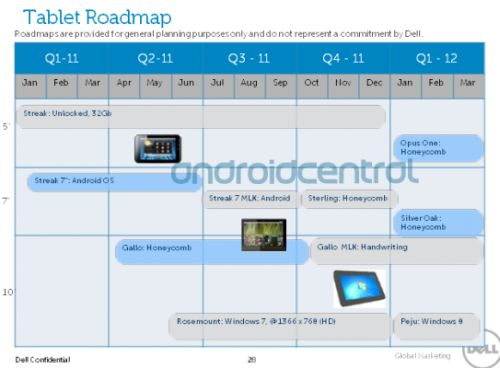 Dell has already explained that it plans to launch a few more tablets this year, including 10 inch Android and Windows 7 models. Now the folks at Android Central have gotten their hands on a leaked slide showing a little or of Dell’s tablet plans for the next two years.

First up, it looks like Dell’s first tablet running Google Android 3.0 Honeycomb is due out around April. It looks like this will be a 10 inch tablet code-named Gallo. The plans also calls for a new 7 inch tablet with Honeycomb during the 4th quarter of the year. It’s not clear if that will just be a Dell Streak 7 with a software update or some completely new hardware, but the product roadmap refers to the new device as “Sterling” rather than “Streak.”

Things get even more interesting when you look out to late 2011 and early 2012. That’s when Dell apparently plans to introduce a 10 inch Android tablet with handwriting recognition, new 5 and 10 inch tablets running Honeycomb, and a new 10 inch Windows tablet (code-named Peju) running Windows. By that point I wouldn’t be surprised if all of the tablets have dual or quad-core ARM-based processors, even the Windows tablets.

Bear in mind, this is a leaked slide, so things could change before any of the products actually make it to market. Or the whole thing could be fake. But it certainly seems plausible (and rather vague, really), based on what we already know about Dell’s tablet plans.