AMD is having something of a renaissance at the moment, with the company’s new Zen CPU architecture offering a huge performance bump over its predecessor and AMD’s Vega graphics technology giving the chip maker an edge over Intel in the integrated graphics space.

So far AMD has released a number of Ryzen chips based on Zen architecture for desktops and laptops. So what’s next? Embedded systems.

It’s been almost a year since details about AMD’s upcoming “Great Horned Owl” R-series chip for embedded systems first leaked. Now there are a few signs suggesting that they’re almost ready to launch… and that it’s likely AMD will show the first Great Horned Owl processor at Embedded World later this month. 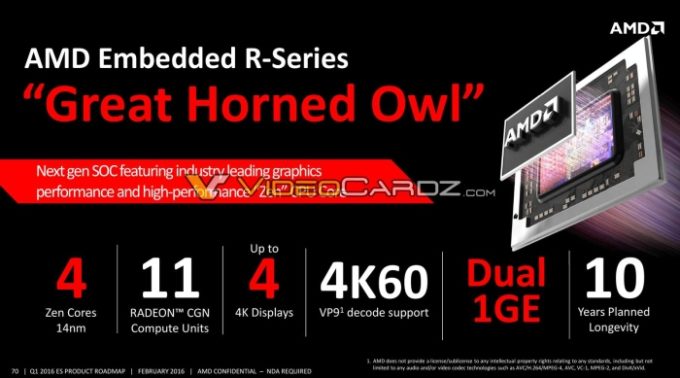 Meanwhile details about other a few other Ryzen V1000-powered modules have beenmaking the rounds recently.

In both cases what we appear to be looking at is an SoC with AMD Zen CPU cores, support for up to 32GB of DDR4-2400 or DDR4-3200 memory, and a 1.5 GHz GPU with 11 compute units and native support for H.265 encoding and decoding, among other things.

Adventech’s data sheet also says the company’s SoM will support dual-core, quad-core, or octa-core chips with TDPs ranging from 12 watts to 54 watts, so it’s possible that we’ll see a series of Great Horned Owl chips and not just a single variant of the AMD V1000 processor.

All told, it sounds like AMD will be bringing some of the key features of its Ryzen Mobile (laptop-class) chips to embedded systems, including Zen CPU cores and Radeon Vega graphics. But with TDPs as low as 12 watts, this could be a lower-power alternative to Ryzen Mobile.

Basically the new R-Series chips could be AMD’s answer to Intel’s embedded Celeron and Pentium “Gemini Lake” processors. And if that’s the case, I wouldn’t be surprised to see AMD offer higher performance-per-watt, at least when it comes to graphics.

Maybe this’ll be the chip that ends up in the Smach Z handheld gaming PC if it ever managers to ship?

We probably don’t have long to wait for an answer. Smach plans to show off the latest prototype at Embedded World starting February 27th.