When you want to buy a laptop or desktop computer you have a few options. You can buy an off-the-shelf or ready-to-ship version that comes with a certain set of specs and features by default. Or you may be able to buy from a PC vendor that lets you customize the choice of processor, memory, storage, and other specs.

Want to buy a smartphone? Up until now you’ve basically been limited to that first option – find a ready-to-ship config that you like and buy it.

But Indian smartphone company Lave has just launched a smartphone configurator that lets shoppers customize their smartphone to get exactly the specs they want. 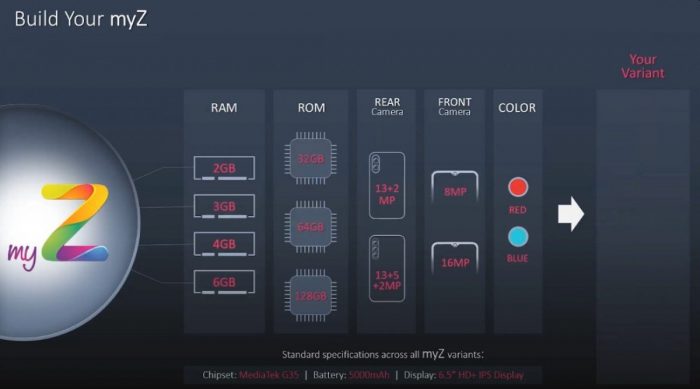 The Lava myZ program lets you select how much memory and storage a Lava Z series smartphone will have, what front and rear cameras it features, and what color the phone will have.

Want a phone with 2GB of RAM and 128GB of storage? Lava will let you build and buy one. Don’t care about front camera quality, but want the best available rear camera system? Then you can choose which parts to emphasize.

Lava says there are 66 different possible combinations. Most phone makers only offer a few different configuration options if they offer any at all.

That said, there aren’t really all that many different options to choose from in some categories. You get two color choices: blue and red. The rear cameras are either going to be a 13MP + 2MP or 13MP + 5MP + 2MP configuration. And the processor, battery, and display for the Lava Z phones are fixed at MediaTek G35, 5,000 mAh, and 6.5 inch HD+ IPS LCD, respectively.

But when it comes to memory you can choose anywhere from 2GB to 6GB of RAM, and for storage you get 32GB, 64GB, and 128GB options.

If Lava myZ is a bit of a gimmick, it’s one I’d like to see more phone makers adopt in the future.