That’s because they feature Intel x86 processors rather than ARM chips. But that hardware comes at a cost.

The LattePanda Alpha with an Intel Core m3 processor, for example, sells for $379 and up — more than 10 times the price of an entry-level Raspberry Pi 4 Model B.

But now there’s a cheaper option — the LattePanda Delta 432 with an Intel Celeron N4100 quad-core Gemini Lake processor is now available for about half the price. 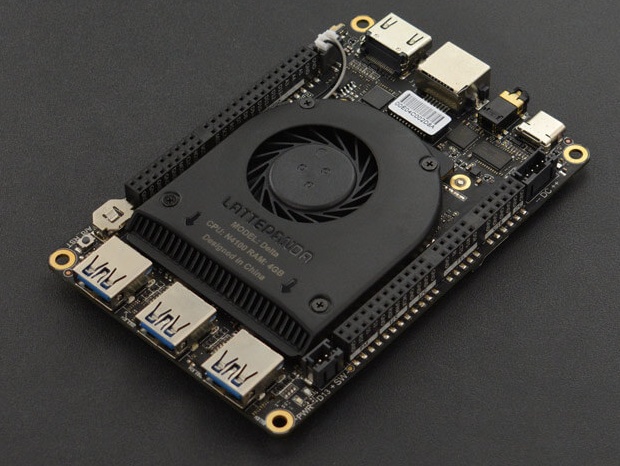 LattePanda actually first introduced the Delta at the same time as the Alpha, when the company launched a crowdfunding campaign almost two years ago.

But a glance at the Kickstarter updates indicate that it took longer than expected to ship the Delta model to backers. Now you don’t need to back a crowdfunding project to get your hands on one though — it’s available from DFRobot in two versions:

Both versions feature 4GB of LPDDR4-2400 RAM and 32GB of eMMC 5.0 storage. And both support Linux, Windows, or other operating systems. The only difference is that one model comes with a Windows 10 Pro license.

There’s also a microSD card reader, 3.5mm audio jack, and two M.2 connectors that you can use to add PCIe storage or other accessories.

Basically, the little PCs are pocket-sized computers that you can use to run just about any modern operating system. Thanks to two 50-pin GPIO connectors and an Arduino co-processor, they’re also hacker-friendly devices. And there are a variety of official and unofficial cases and other accessories for the LattePanda ecosystem.

I’m not entirely sure when the LattePanda Delta 432 became available for purchase from DFRobot, but I first noticed it thanks to a recent post from French website MiniMachines.