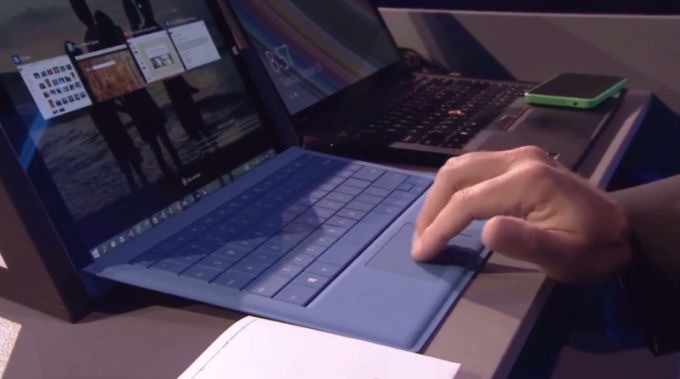 If you’re using build 9879 or later on a notebook with a precision touchpad, you can now use 3-finger gestures to manage your currently-running apps. A 3-finger swipe up reveals Task View. Swipe down with 3 fingers and you’ll show the desktop.

Use 3 fingers to flick right or left and you can switch to the previous app. Or move your fingers more slowly to scroll through apps as if you were hitting Alt+Tab. Just lift your fingers to select the app you want to switch to.

You can also now use a 3-finger tap to open the Search app.

Speaking of the Search app, if you don’t want a permanent Search icon in your Windows taskbar, just right-click the taskbar and uncheck the new box that says “Show Search button.” You can also hide the Task View button.

Other changes in build 9879 include improved OneDrive sync so that you won’t see placeholders in File Explorer for files that aren’t actually downloaded to your device.

Microsoft has also improved native support for videos using the MKV format: you can play them in Windows Media Player as well as other apps, and when you view MKV files in the File Explorer you’ll be able to see thumbnail images and metadata.

Microsoft is also testing the new Edge rendering engine for Internet Explorer — but will only make it available to about 10 percent of the people testing Windows 10 for now.

At this point Windows 10 is still very much a work in progress, but anyone who signs up for the Windows Insider Program can help test pre-release builds of the operating system. The latest build also includes a new Insider Hub app which provides the latest news about the Insider program.

Microsoft will also start offering ISO images of each new build of Windows 10. Up until now if you’ve wanted to install the Windows 10 preview you’ve needed to download and install an outdated version and then download updates on your PC.

But since Microsoft wants to gather feedback about its update process, the fastest way to get new builds will still be to use the Windows Update tools in your PC Settings app, because Microsoft will push new builds that way before making the ISO images available.

You can find out more about Windows 10 preview build 9879 at the Windows blog.