At this point it’s pretty clear that HTC plans to launch a new smartphone with pressure-sensitive sides that allow you to control some functions by squeezing the phone rather than touching the screen. But just in case you needed more confirmation, a 3 minute hands-on video from China gives us a good look at the HTC U11, about a day before it’s expected to be officially unveiled. 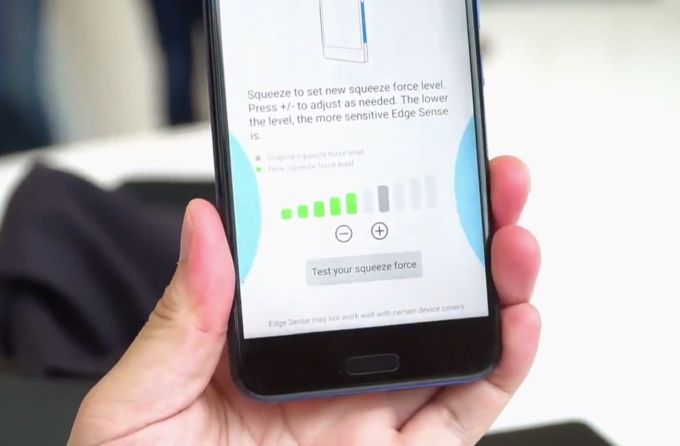 As expected, the phone’s most distinctive feature is its pressure-sensing frame and Edge Sense software that lets you squeeze the phone to do things like snap a photo while using just one hand. Edge Sense can also be used to launch an app on your phone.

The HTC U11 features a 5.5 inch display, a Qualcomm Snapdragon 835 processor, an IP57 waterproof rating, and a 12MP rear camera and 18MP front-facing camera.

There’s a USB Type-C port, but no separate headphone jack. And the Chinese version of the phone is expected to ship with 6GB of RAM, while the international variant will have just 4GB. HTC isn’t the first company to ship a higher-RAM version in the Chinese market, where that’s a feature phone makers may feel is necessary to compete against domestic brands which are loading up their phones with RAM.

It looks like HTC will offer several different color options for the HTC U11, including black, white, red, and two different shades of blue.

2 replies on “Latest HTC U11 squeezable smartphone leak: a hands-on video from China”