Password manager LastPass has updated its Android app so that it can auto-fill usernames and passwords in Google Chrome and other Android apps.

LastPass already offered separate plugins for the Firefox and Dolphin web browsers for Android, but this is the first time it’s worked with Chrome… albeit it’s not quite as well integrated with Chrome as it is with the other browsers. 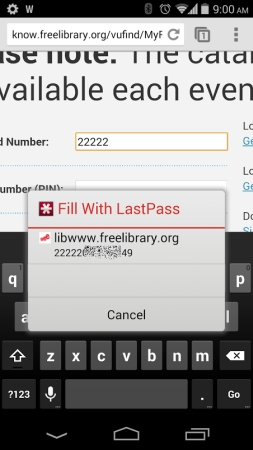 You’ll need Android 4.1 or later to use LastPass with most Android apps, and Android 4.3 to use it with Chrome. You’ll also need to pony up some cash: while LastPass offers a free service for desktop browser users, the Android app is only available to LastPass Premium subscribers who pay $12 per year (or sign up for a 2-week free trial).

I’ve been paying for LastPass for the past few years because it’s a life-saver for folks who want to use unique, secure, hard-to-remember passwords for different websites and apps, but who also use multiple devices on a regular basis. While there are plenty of secure password managers that work on a single device, LastPass saves your data in the cloud where it’s encrypted, but available across your computers, phones, tablets, and other devices.

You can also use 2-factor authentication with LastPass, so if you do lose your phone you don’t have to worry about someone using it to access all of your passwords.

Anyway, as for the new Android features, after you install the latest version of LastPass for Android and enable the auto-fill feature, you can launch an app that requires a login LastPass will display a pop-up prompting you to select login credentials for a matching site.

It may not work with every app right away, but LastPass is crowdsourcing app suggestions and letting users help make sure that as many apps as possible recognize the feature. For instance, LastPass may not realize that the password it has for your bank account website should work with your bank’s app until you tell it.

Overall this update makes the LastPass mobile app a heck of a lot more useful… although you’ll have to decide if you want to favor convenience or security. The app has an option to remember your LastPass password, which means that you won’t have to enter it every time you visit a website or launch an app… but it also means that other people will be able to use your phone to access those services unless you disable that feature.

The good news is that LastPass will prompt you to re-enter that password after a set period of time if you haven’t used the app in a while.