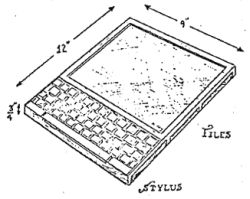 Wired’s Brian Chen notes that the first concept for a portable computing device was drafted in 1968. So he sought out Alan Kay, the guy who first came up with the idea of a 2 pound portable computer that he called the Dynabook and asked him what he thinks about laptops and portable computers 40 years later.

To oversimplify, Kay still thinks there’s a lot of work to do. He’s not particularly happy with the limitations of notebok screens and envisions a day when we’re more likely to use head mounted displays than tiny screens attached to keyboards.

I was particularly intersted in Kay’s response to Chen’s question about netbooks. Kay says that the form factor might be better suited to the way people use computers than larger machines. But he thinks this might just be due to the fact that most people don’t demand very much of their computers and use netbooks primarily as portable terminals where the only really important application is the web browser.

On the one hand, that’s probably true. But with more and more of the applications that people use on a daily basis moving online, I’d say it’s also true of full sized laptops and desktop computers. The web browser is becoming the most important program on any computer. And for many people, it’s the only application they really need.

That said, while netbooks certainly aren’t as powerful as many full sized computers, they can certainly do more than run a web browser. I’ve used my netbooks to edit audio, watch movies, manage spreadsheets, and perform other tasks. I think part of the problem is in the name. Like most people, I’ve taken to referring to low cost ultraportable computers as netbooks because it’s tempting to come up with a good label for this class of device. But just because they’re tiny laptops capable of connecting to the internet doesn’t mean that’s the only thing they can do. And while Kay may have invented the concept of the laptop, I’m not sure he’s spent enough time with modern liliputers or other laptops to notice whether they’re truly useful enough to fit his original vision. If that even matters.

What do you think? Do netbooks fit the definition of the original dynabook?