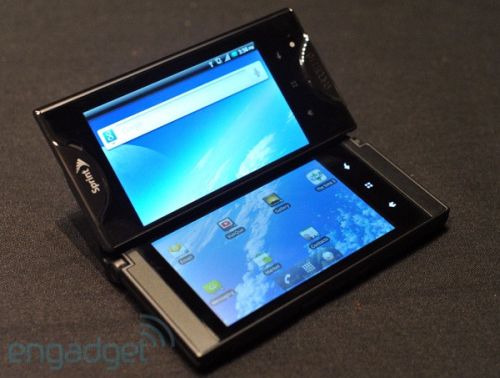 Sprint introduced a new smartphone called the Kyocera Echo this evening. But calling it a “smartphone” might not be doing it justice. This little guy features twin displays, allowing you to use it like a single-screen phone or a tablet. You can also prop up one screen at an angle to use the device like a mini-laptop.

The device is powered by a 1 GHz Qualcomm Snapdragon processor and Google Android 2.2 with software optimizations allowing some apps such as the web browser and email app to work on both screens at the same time.

You can also run separate apps side by side, with one showing up on each screen. This is the sort of multitasking we’re used to seeing on laptop or desktop computers, not phones, which usually refer to multitasking as the ability to run a music app in the background while you’re playing a game or reading a book in the foreground. Now you can actually have a web browser open in one window and an email app in another.

Engadget reports that only the app on one screen is truly active at a time though. So while web surfing/emailing will work nicely, you can’t watch a video while composing an email, because as soon as you start working in the email app, the video will pause.

The Kyocera Echo has a 5MP rear-facing camera that can shoot 720p video.

The device is expected to sell for $189 when you sign up for a 3G service contract with Sprint.

5 replies on “Kyocera Echo blurs the lines between phones, tablets, and netbooks”