The Kupa Ultranote X15 is a Windows 8 tablet with a laundry-list of top tier specs. It has a 10.1 inch, 1920 x 1200 pixel IPS display. It has 8GB of RAM. It has an Intel COre i5 or faster processor. And in addition to a 10-point capacitive multitouch display, the X15 has an active digitizer which lets you use a pressure-sensitive pen for writing or drawing.

Introduced last year, the Kupa Ultranote X15 is now available for purchase from Dynamism… but those features don’t come cheap. The tablet runs $1099 and up. 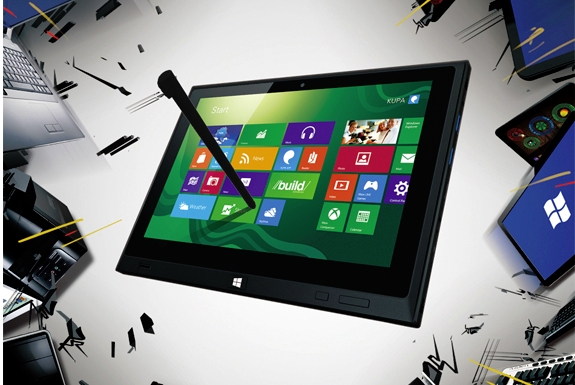 Other nifty features include a removable battery, an optional keyboard dock that lets you use the tablet like a notebook, and a side panel that can theoretically accept other docking components for optional card readers or other accessories (if and when Kupa releases those accessories).

The base model features an Intel Core i5-3317U Ivy Bridge processor and 64GB solid state disk. You can pay extra for more storage, a faster processor, or integrated 3G, with prices topping out at $1599 for a model with a Core i7-3517U chip, 128GB of storage, and a 3G modem.

All models feature front and rear cameras, 2 USB 3.0 ports, mini HDMI ports, WiFi, and Bluetooth. The tablet measures about half an inch thick and weighs about 1.7 pounds.

Dynamism is taking orders for the X15 now, but doesn’t expect the tablet to ship until early March.

Note that some of the premium features could be a mixed blessing — as I noted in my Acer Aspire S7 ultrabook review, high resolution displays work great on Windows 8 computers when you’re running full-screen, Metro-style apps.

But text and graphics can look awkward in some desktop apps — and that’s just what I observed while using a notebook with a 1920 x 1080 pixel 13.3 inch display. The Ultranote X15 has a smaller screen with even more pixels.