Kupa plans to launch a new Windows 8 tablet called the UltraNote in November. It’s a 10 inch tablet that checks nearly every box you could want from a premium tablet.

Want an HD screen? It’s got it. Ivy Bridge CPU? Check. Removable battery? Yup. And the list goes on. 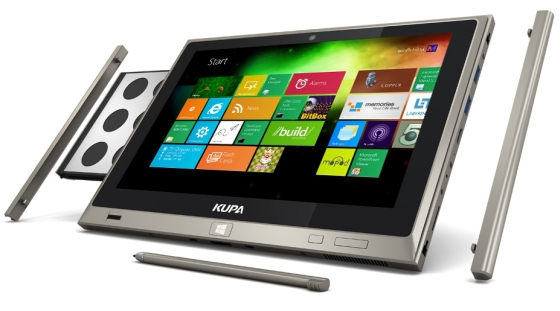 While Kupa isn’t exactly a household name, the company’s been making Windows tablets for a little while. I tested the Kupa X11 tablet with a pre-release version of Windows 8 earlier this year, and while the tablet’s a bit chunky, it performed reasonably well.

The new Kupa UltraNote is a much more powerful machine, with:

Kupa will also offer an optional keyboard docking station with USB, Ethernet, and video ports and an SD card reader. The keyboard also has a built-in battery, letting you use the tablet and keyboard together for up to 12 hours.

The UltraNote also has a modular design. You can add panels to the left and right sides of the tablet to attach a card reader, scanner, or other additional features. While the photos show what sort of looks like a disc drive, that’s actually the swappable battery which you can pop out and replace.

Kupa hasn’t yet announced the pricing for the UltraNote, but it probably won’t be cheap. The computer has some of the best hardware options I’ve seen from a 10 inch Windows 8 tablet so far, and Kupa’s a relatively small company that might not get the same kind of breaks on components that a Lenovo or HP get.

But it’s nice to see a company offering such a powerful, customizable Windows 8 solution.