There are a growing number of options for folks who want to buy a high-end laptop that comes with a GNU/Linux distribution rather than Windows, Mac, or Chrome OS. And next year it looks like there may be at least one more.

The upcoming Kubuntu Focus notebook has the kind of specs you’d expect to find from a high-end gaming laptop. But while most gaming PCs ship with Windows, this one will run Kubuntu (Ubuntu Linux with the KDE desktop environment). 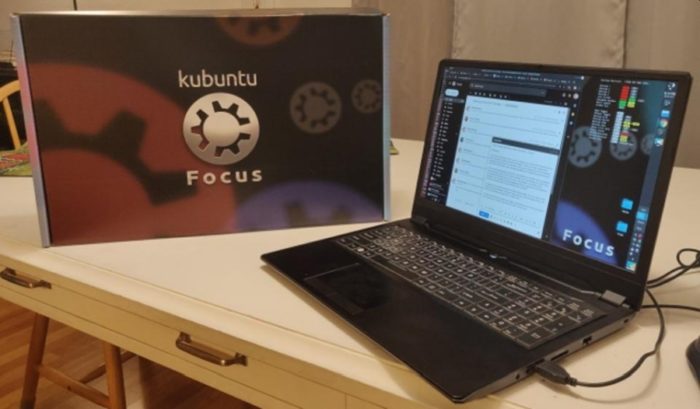 No, the Kubuntu Focus isn’t exactly cheap. But it has the kind of specs you’d hope to find in a premium laptop, including:

The notebook features a 16.1 inch, 1920 x 1080 pixel matte IPS display, an LED backlit keyboard with 3-4 mm of key travel, a metal and plastic chassis that measures less than 0.8 inches thick, and the computer comes with a 2-year warranty.

Linux computers haven’t always been the best option for PC gaming, but things have gotten a lot better in recent years with Valve bringing its Steam game client to Linux and more recently adding support for playing Windows-only games (including those not normally available through Steam).

And in addition to gaming, the computer’s beefy specs could come in handy for video editing, software development, and other tasks.

If the design looks familiar, that’s because the hardware isn’t an original design — it’s a rebranded Clevo computer that comes with custom software. But since the Kubuntu Focus laptop comes through a partnership between the Kubuntu Council, Tuxedo Computers, and Mindshare Management, 2 percent of the sales price will go to the Kubuntu Council and help fund continued development of the operating system.

via Phoronix and Forbes