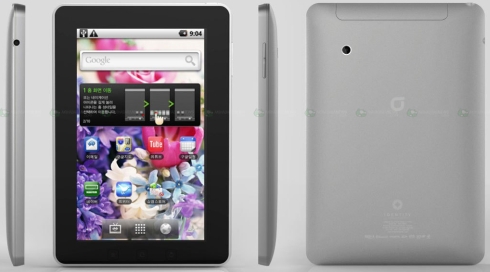 While the vast majority of PC makers appear to have decided that the best way to compete with Apple’s iPad is to produce a portable tablet with the word “Pad” somewhere in the name, a few are taking a different approach by using “Tab” to indicate that the tablet is, well, a tablet. There’s the Neofonie WeTab, Samsung Galaxy Tab, and now we can add the KT Identity TAB to that list.

Akihabara News reports that the Korean wireless carrier has introduced a 7 inch tablet called the KT Identity TAB. It actually looks an awful lot like the upcoming Samsung Galaxy Tab which will likely be introduced in a few days.

The Identity TAB features a 7 inch multitouch display, a 1GHz Qualcomm Snapdragon processor, 8GB of internal memory, a DMB TV tuner, gyro-sensor, 3MP camera, and SD card reader. The base model apparently features WiFi connectivity, but it’s also available with an optional WiBro 4G data card. Customers can pick one up in Korea for about $252, or for free with a 2 year WiBro contract.