Android app developer (and member of the Cyanogen team) Koushik Dutta offers a series of apps designed to let you stream content from an Android phone or tablet to a TV using an Apple TV, Google Chromecast, Roku, or other device.

Not only can you stream photos, videos, or music from your phone with his apps, you can actually mirror your phone’s screen on you TV, allowing you to project web pages, videos, or even games.

Now he’s showing a demo of mirroring with Amazon’s Fire TV, and it seems to be one of the best devices for the task at this point.

Update: Koush’s Allcast app has been updated with beta support for the Amazon Fire TV> 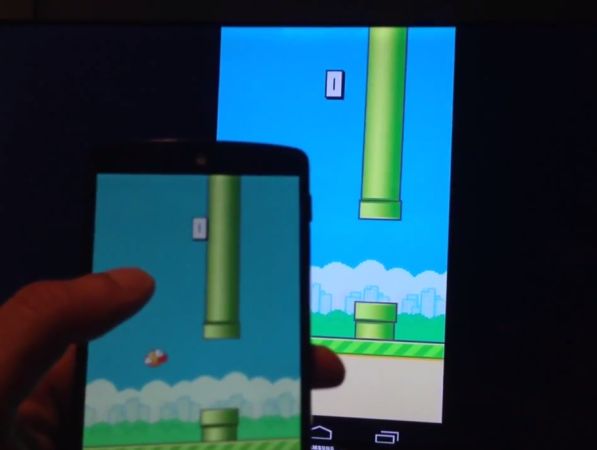 is a $99 box designed to bring internet audio and video to your TV. It also supports games and other apps from the Amazon Appstore. But what really sets it apart from similar devices is the hardware — the Fire TV basically has the guts of a mid to high-end smartphone, including a Qualomm Snapdragon quad-core processor and 2GB of RAM.

So perhaps it’s not surprising that Dutta says it handles screen mirroring better than the Apple TV or Google Chromecast.

He’s posted a video showing a few games running on his phone and mirroring to his TV. There’s very little lag, and both audio and video quality are good.

Koushik Dutta offers several different phone-to-TV apps including AllCast for streaming music, videos, and other content, and Mirror, which lets you mirror your display. While the Fire TV screen mirroring feature seems like it would be part of the Mirror app, the demo video shows Dutta triggering it from within the Allcast app… although that may just be a custom version he’s using for testing purposes.