In other words, unlike the Raspberry Pi and other ARM-based mini-computers, the upcoming Kontron KTT30 MiTX motherboard will fit into any off-the-shelf computer case designed for a mini-ITX board. 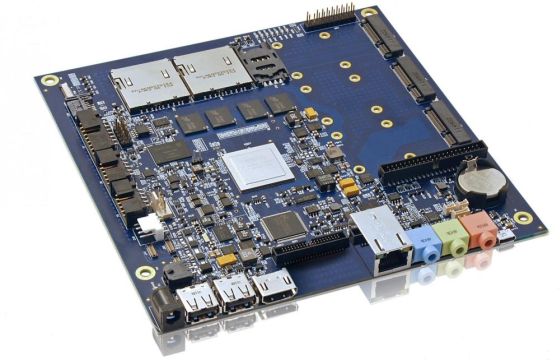 That could make the KTT30 a starting point for a DIY low power computer with a TDP of under 7 watts.

While Windows doesn’t yet run on ARM-based processors, there are a wide range of Linux-based operating systems including Ubuntu, Debian, and Fedora that support ARM chips. And of course there’s always Google Android.

The KTT30 could also provide an alternative to the $299 Google Nexus Q media streaming device or the upcoming Ouya $99 video game console for those looking to build their own systems.

The Kontron KTT30 features a 900 MHz Tegra 3 quad-core processor and features HDMI 1.4a output, an Ethernet jack, 3 USB 2.0 ports, 2 SD card slots, audio jacks, and miniPCIe slots. It can support up to 2GB of RAM and it can handle camera input, USB mass storage devices, and other peripherals.

Pricing hasn’t been announced, but given the specifications, I think it’s safe to say the KTT30 will cost more than a $49 VIA APC and less than a $199 Google Nexus 7.

via Blogeee and Fanless Tech