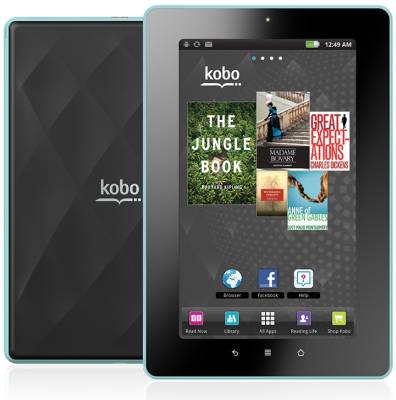 Looking for a $200 Android tablet with a 7 inch color screen for reading eBooks, but don’t feel like handing your money over to Amazon for a Kindle Fire? Kobo’s got you covered.

The Kobo Vox tablet went on sale today. It comes from the company that’s probably the third best-known eBook provider, after Amazon and Barnes & Noble. Kobo’s book store offers 2.2 million eBooks, including about a million titles that you can download for free.

But while the Vox is aimed at readers, it actually looks like as reasonably good all-purpose tablet. Its features include:

The Kobo Vox ships with a web browser, photo, music, and video apps as well as Facebook, Twitter, Rdio, Zinio, and PressReadre apps for social networking, music, magazines, and newspapers. The tablet doesn’t come with access to the Android Market, but Kobo says users can download over 15,000 free Android apps.

While Kobo’s tablet doesn’t offer the digital music or movie stores that you get with Amazon’s tablet, Kobo Vox owners will get a more standard Android experience and an SD card slot for expansion. The tablet also appears to have a front-facing camera, although there’s no mention of it on the spec sheet.