Kobo has launched an updated version of its Kobo Touch eBook reader.

Update: The Chapters.Indigo listing has been removed, but Kobo has officially introduced the new eReader: The Kobo Touch 2.0 should also be available in the US and Canada starting September 9th for $90. 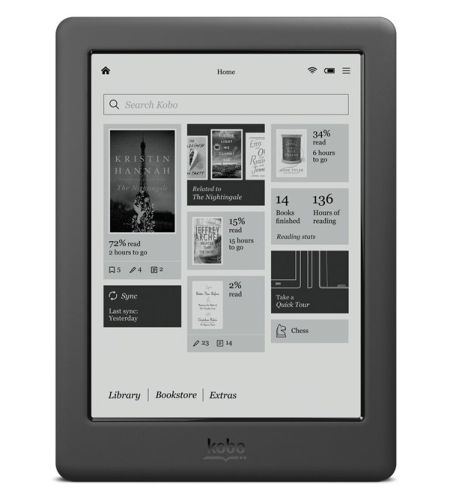 Kobo hasn’t added the new model to its website yet, but the new entry-level eReader is expected to replace the original Kobo Touch.

The new eReader features a 6 inch, 800 x 600 pixel E Ink Pearl display. The screen is not illuminated: you’ll need to opt for a more expensive model such as the Kobo Glo HD, Kobo Aura, or Kobo Aura H20 if you want a built-in light for reading in the dark.

There aren’t many details available about the differences between the original Kobo Touch and version 2.0. But the new model seems to have a Kobo logo on the bottom of the device where there used to be a home button. And according to the product listing at Chapters.Indigo, the new model should get up to 2 months of battery life, while the original Kobo Touch had a 1-month battery.

The back of the new eReader also seems to have a new design. Instead of a sort of fake-quilt texture, the Kobo Touch 2.0 has a flat back with slopes on the left and right edges to make the device a bit thinner at the sides than it is in the middle.