An unannounced device called the Kobo Glo HD showed up recently on the website of New Zealand retailer Mighty Ape. 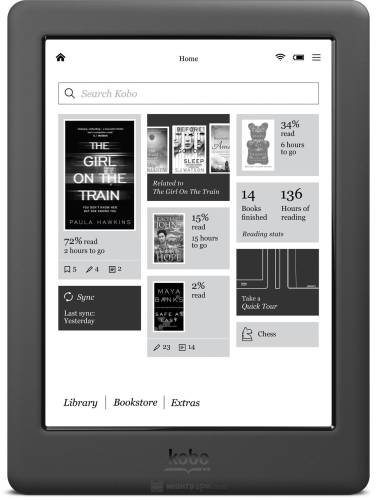 Kobo already offers several eBook readers with high-res displays. The Kobo Aura HD has 1440 x 1080 pixel display, while the waterproof Aura H20 has a 1430 x 1080 pixel screen. But both of those tablets have 6.8 inch displays, while the Kobo Glo HD has a smaller 6 inch screen… which means text will be even sharper on the new model.

The new model features 300 pixels per inch, while the Aura HD and H20 pack about 265 pixels per inch. It’d probably be tough to tell the difference, but the more pixels the merrier… especially since it seems likely that the Kobo Glo HD will be cheaper than the Aura models.

Mighty Ape shows a list price of $220 for the new model, while the New Zealand store sells the Kobo Aura H20 for $300.

There’s no word on a US price or release date for the Glo HD, but Kobo currently charges $170 for the Aura HD and $180 for the Aura H20 in the States. It seems likely that the Kobo Glo HD will sell for a lower price.

Other features for the new model include 4GB of storage and up to 2 months of battery life.

Update: A user guide found on the Kobo website confirms what some observers had expected: it looks like the new model lacks a microSD card slot.

via The eBook Reader and Mobile Read