The Kobo Glo is a 6 inch eReader with a 1024 x 768 pixel E Ink display, a 1 GHz processor, 2GB of storage, a microSD card slot, and up to a month of battery life. It has a touchscreen display, a front-light for reading in the dark, and Kobo’s software for reading (and buying) eBooks.

If that’s not good enough for you though, you can always turn the device into an Android tablet. 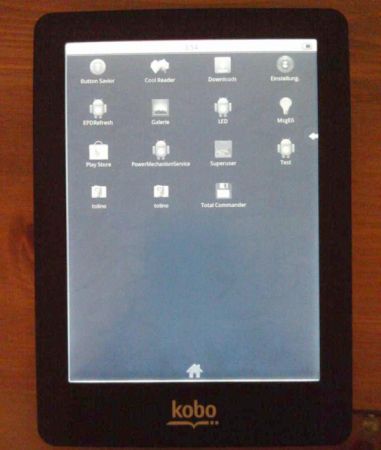 While Kobo’s software isn’t based on Android, the Kobo Glo has hardware that’s very similar to what you’d find in a German eReader called the Tolino Shine — and that device does run Android.

So it’s possible to take the software from the Tolino Shine and run it on the Kobo Glo, as MobileReader forum member SyreKron discovered.

Swapping out one eReader user interface for another is cool, but not necessarily that useful. But things get really interesting when you root the software and enable support for the full Android user interface and third party apps, something MobileReader forum member KevinShort confirmed you can do with Android on the Kobo Glo.

The Kobo Glo doesn’t have the large battery, color display, or a fast screen refresh rate like you’d find on a true Android tablet, so you probably won’t want to use Android to play 3D games or watch videos. But this hack should let you surf the web, play simple games, or use the Amazon Kindle or B&N NOOK apps on Kobo’s eReader.