Kobo has been following in the footsteps of Amazon and Barnes & Noble for the past few years. But the company’s latest eReader suggest the company is looking to come out from behind the shadow of those giants.

Last year the company introduced an inexpensive 5 inch eReader called the Kobo Mini. And now Kobo is launching a new device with a larger, higher resolution display. It’s called the Kobo Aura HD and it’s not quite like anything else on the market at the moment. 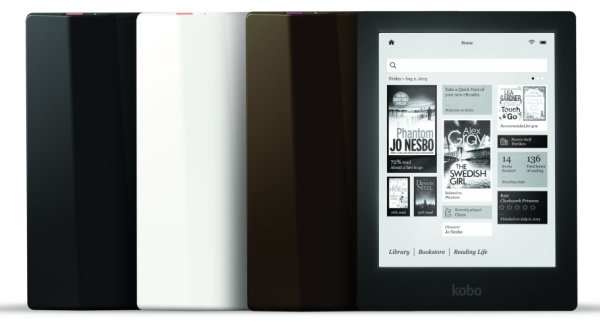 Like the latest eReaders from Amazon and B&N, the Kobo Aura HD also has an illuminated display, letting you read even in a dark or dim room.

Kobo users have a choice of 10 different font styles and 24 font sizes.

The eREader supports books in the EPUB, PDF, and MOBI formats, and works with Adobe DRM. So you can read books purchased from the Kobo store, but you should also be able to borrow digital library books or transfer purchases from other stores that use Adobe’s digital rights management software.

Kobo is calling the Aura HD a limited-edition device, which will sell for $170 while available. It goes up for pre-order April 16th in the US, and will be available in the UK and Canada April 25th. The eReader will be available in black, white, and brown colors (which Kobo calls onyx, ivory, and espresso).