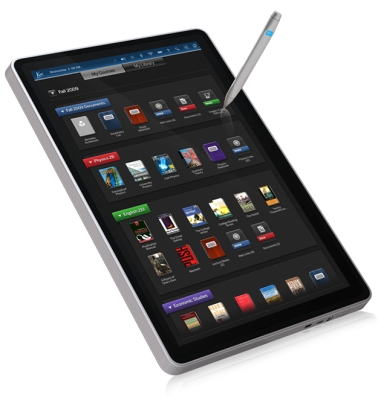 Kno made a bit of a splash when the company announced plans to introduce a monstrous touchscreen tablet style device with two 14 inch touchscreen displays. While Kno still plans to ship that tablet for students by the end of the year, the company today announced plans to launch something a little more traditional — which will also likely be a little smaller, lighter, and cheaper.

Kno’s new tablet will features a single 14.1 inch touchscreen display. While the dual screen version will run as much as $1,000, Kno plans to sell the single screen variant for less — although no final pricing has been announced yet. The goal is to ship both the single and dual screen tablets by year’s end.

You can find more images at TechCrunch and at Kno.com, but the long and short of it is that this tablet is clearly aimed at the education market and Kno is emphasizing the tablet’s features for reading eBooks, highlighting passages and jotting notes, drawing pictures, and writing with a stylus.