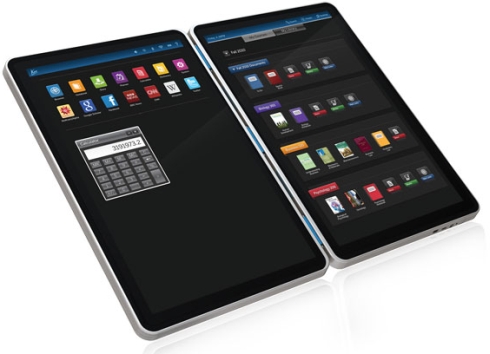 A startup called Kno got a lot of attention last year with the introduction of a new line of tablets aimed at college students. There’s a 14 inch slate, and a dual-screen model with twin 14 inch displays. The Kno tablets are big and heavy when compared with modern tablets such as Apple’s iPad, but they’re still a lot easier to carry around than the backpack filled with textbooks Kno hopes to replace.

But Kno has decided that rather than focus on hardware, the company wants to focus on tablet software. The company’s tablets featured a custom version of Linux with software for reading textbooks, taking notes, and performing research.

Now All Things D reports that Kno is getting out of the hardware business, licensing its hardware technology to Intel and other investors. Intel doesn’t typically build complete systems, but the company will likely share the hardware designs with partners who may build Kno-like tablets, much the way Intel partners build Classmate PC netbooks based on Intel’s designs.

Meanwhile, Kno will likely turn its attention to software for the iPad and other tablets as well as tablets built using the company’s designs.